History and Information on Penn in the County of Staffordshire.

Some history of Penn

More information on Penn to follow. I probably created the page as I had a link to Penn from another page. When building the site it is easier to place links as they crop up rather than go back later on. I realise this is frustrating if you were specifically looking for information on Penn. There is information on Staffordshire dotted around the website - click here for a suitable starting place. 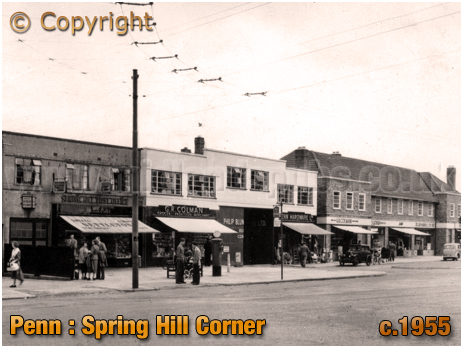 If you have a genealogy story or query regarding Penn you can contact me and I will post it here in addition to including your message within the website pages for Staffordshire Genealogy.

If you would like to share any further information on Penn - perhaps you drank in one of the pubs in the past? Or maybe knew a previous publican running one of the boozers? Whatever the reason it would be great to hear of your stories or gossip. Simply send a message and I will post it here.

"At the County Petty Sessions, on Monday last, before H. Hill, Esq., W. Tarratt, Esq., and Captain Thorneycroft, William Pugh and George Pargeter, principals, John Fleet and John Downs, seconds, and seven others were summoned for being engages in a prize fight on Penn Common, on Sunday morning last. Police Constable Bullock, one of the county constabulary, found the defendants with mob of about two hundred persons just about to commence a prize fight, and courageously interfered to stop it. The defendants, with others, threatened the police officer, but they eventually moved off. They were bound over in their own recognisances of £20 each to keep the peace for three months."
"Prize Fight Prevented"
Wolverhampton Chronicle and Staffordshire Advertiser
October 13th 1858 Page 5