Some history of the Bricklayers' Arms at Tamworth in Staffordshire 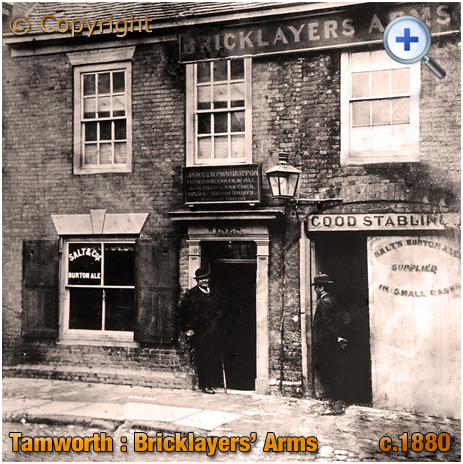 "The marriage of Mr. Egbert De Hamel, tape manufacturer, of Tamworth, to Miss Ernestine Donovan of Hawkhurst, Sussex, was on Thursday morning solemnised at Hawkhurst. In the afternoon the workmen connected with the factory, in George Street, Tamworth, were entertained to a very excellent dinner at the Bricklayers' Arms. Mr. Joseph Smith occupied the chair, and Mr. Jabez Russell vice chairman. The healths of the bride and bridegroom were duly honoured, and the evening, at the Town Hall, a 'knife and fork' tea was given to the females employed at the factory. This was followed in the evening by further festivities in the form of dancing etc. An excellent string band under the leadership of Mr. A. Jones was in attendance, and free refreshments were provided by Mrs. Pemberton at the Bricklayers' Arms, who was also responsible for the dinner and tea. Over 200 were entertained during the day, and that the proceedings were carried through without the slightest hitch, reflects great credit upon the management of Mr. J. Jones, and Mr. T. Lunn, under whose supervision the arrangements were carried out. The proceedings, which apparently had afforded the greatest enjoyment to all concerned, decorously terminated about midnight. The happy pair are spending their honeymoon at the Isle Wight."
"Marriage of Mr. E. De Hamel"
Tamworth Herald : September 23rd 1882 Page 5