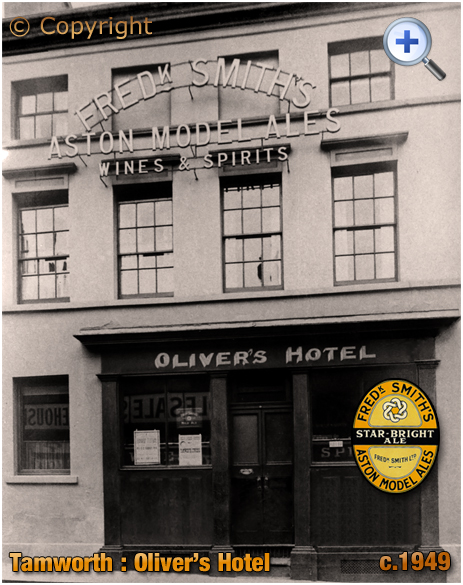 "Driver William James Frost, 2nd Light A.A. Battery, Royal Artillery, Whittington Barracks, was charged with stealing a soda water syphon, valued at 2/6, the property of Albert Henry Morgan, the Castle Brewery, on September 17th. He was also charged with stealing a soda water syphon, valued at 2s., the property of Oliver Boonham, Oliver's Hotel, George Street, on September 17th. Accused said he only stole the one from Oliver's Hotel. George Edward Walters, barman at the Castle Hotel, Tamworth, said he was serving in the lounge of the hotel on September 25th, and at about 9 p.m. he placed a soda water syphon on the table. Several men came in, and at 10 p.m. he collected the glasses, but found the syphon was missing. P.S. Bradley said at 10-5 p.m. he saw the defendant in Market Street, and noticed he had something he was trying to conceal underneath his coat. Witness questioned him, and he found it was a soda water syphon. Defendant said he had brought it from the Barracks, but witness found it was similar to the one missing from the Castle Hotel. The other syphon from Oliver's Hotel was taken by defendant and left at the Castle Hotel. This he admitted. Defendant said he took the syphons as a joke. The cases were dismissed under the First Offenders' Act, but defendant was ordered to pay £1 in each case towards the costs. The Mayor issued a serious warning against a repetition of such practices."
"A Costly Joke"
Tamworth Herald : October 9th 1937 Page 5