Some history of the Royal George Inn at Abberley in the county of Worcestershire.

The Royal George Inn was a beer house on the Ludlow Road [now known as Stockton Road] at Elms Green. The building has survived and is a private house. In recent times it has been known as Orchard Cottage. Indeed, in the census of 1851 the house was listed as Elms Orchard and was occupied by the beer house keeper George Overton and his wife Ann. 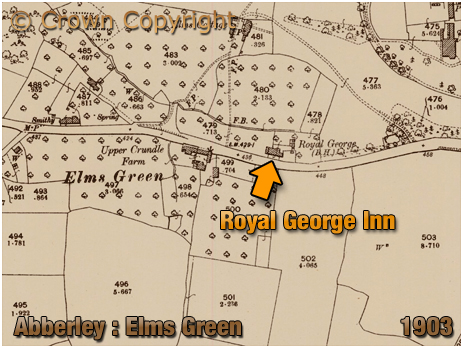 The beer house was certainly known as the Royal George by 1856 when an inquest concerning a mining accident was held in the tavern.

Dating from the early Edwardian period, the above map extract shows the Royal George Inn fronting the main road. To the west on the south side of the road is Upper Crundle Farm. This was being renovated when I last cycled past. There used to be a smithy a little further on, close to the road junction. On the north side there was once a track with a bridge over the stream that led to Elms Cottage. That building has vanished. The large building to the top-right of the map is now The Elms Hotel. 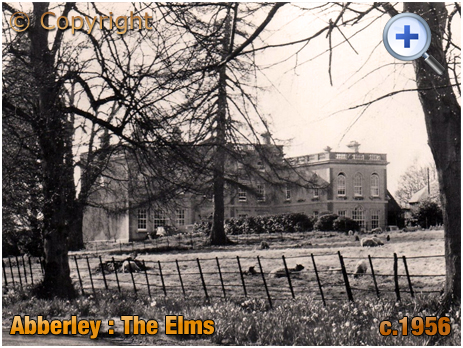 The Queen Anne mansion is thought to have been built by the Bury family around 1710. Thomas Bury became Sheriff of Worcestershire. The house was acquired by Admiral Thomas James Maling following his marriage to Jemima Bromley in 1828. She was the daughter of Colonel Henry Bromley of Abberley Hall. Following the death of the Admiral, the house was purchased by James Moilliet, son of John Lewis Moilliet who had acquired Abberley Hall. After a period of the house being rented by the Pearson family, the mansion was acquired by Joseph Jones. The house was enlarged with two wings being added by Sir Richard Christopher Brooke during the early 20th century. The family sold the house in 1946 and it has since been a hotel.

George Overton was formerly a coal miner. He kept the Royal George beer house with his wife Ann. Their son William lived with them, along with their niece Mary Stallard. Following George's death in 1854, widow Ann Overton took over as licensee. In October 1856 she was hauled before the magistrates for having the house open for business before twelve noon on a Sunday, deemed to be a serious offence. She was fined 10s. and costs.

During her widow's year Ann Overton married William Hill and remained at the Royal George, her second husband taking over as licensee. In the 1861 census he is listed as innkeeper suggesting that the house had elevated its standing and offered accommodation to those journeying along the highway. William Overton, Ann's son from her first marriage remained on the premises.

Thomas Pugh was mine host in the late 1860s before the licence was transferred to Holt-born agricultural labourer George Hill in September 1871. He had married Isabella Knott five years earlier at St. Martin's Church in Birmingham. The daughter of the local blacksmith Joseph Knott, Isabella was a teacher at the infants school. The Knott clan operated the Cooper's Arms, another beer house in the parish.

After a decade of running the Royal George Inn George and Isabella moved to the smithy run by her brother, later settling into a neighbouring cottage where they remained for many years. George later worked as a domestic gardener, possibly finding work in the ground of The Elms. Isabella spent her whole life in Abberley.

In May 1881, at the Petty Sessions held at the Hundred House, the licence of the Royal George was transferred from George Hill to William Stallard. Locally-born, he followed in his father's footsteps and became a boot and shoe maker. Along with his wife Helen, he kept the tavern for only a year, returning to his old trade. The couple lived for a period at Kinlet before settling in Helen Stallard's parish of Martley. Interestingly, William Overton, a cousin of William Stallard, was still living on the premises in the 1880s. He had seemingly become part of the fixtures and fittings!

In May 1882 the licence of the Royal George was transferred from William Stallard to William Lewis, once the proprietor of a coal mine at Menithwood in the parish of Pensax. This was a stable period in which the Lewis family kept the house for the rest of the 19th century. Following William's death, the licence was transferred to his wife Coley in January 1892.

In July 1885 Joseph Hall, described as an "Old Gaol Bird," who had been many times previously convicted, was charged with refusing to leave the Royal George Inn, when requested on 18th January 1883. The man was summoned at the time for the offence, but he failed to answer the summons, and a warrant was issued for his arrest. It was over two years before he came up before the Bench at the Hundred House. He waa fined 20s. and costs, but as he was unable to pay, he was sent to prison for one month with hard labour.

Coley Lewis remained at the helm in the early years of the 20th century. She was assisted by her daughters Agnes and Selina, the latter being a widow with a young son, William Palmer. She would later marry the carpenter Samuel Sherrif. 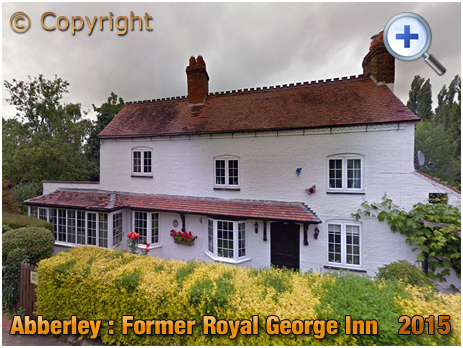 Previous incumbents George and Isabella Hill still patronised the Royal George Inn during the Edwardian period. Landlady Coley Lewis died in April 1908. Her daughter Agnes continued to run the business. She married Thomas Palmer in 1910 and he took over the licence of Royal George Inn, though much of his time was devoted to farming. He had grown up on the Palmer family's farm in Stanton Lacy in Shropshire. During their tenure the Royal George was occasionally used as a venue for the Worcestershire Hounds.

Thomas Palmer died in July 1924, the licence of the Royal George Inn passing to widow Agnes. She was still running the Royal George at the outbreak of World War 2. She lived on the premises with three sons, though eldest son Edward had joined the RAF as a mechanic. Gerald did much of the help running what was still a beer house. His younger brother Stanley worked as a lorry driver's mate.

Agnes Palmer lived to the ripe old age of 90, dying in May 1962 and buried in the churchyard of St. Mary's Church.

Licensees of the Royal George Inn

"An inquest was held before W. S. P. Hughes, Esq., at the Royal George beer house, Abberley, yesterday week, on the body of an old man, a stranger, who was found on Sunday morning apparently frozen to death in a field adjoining the farm buildings of Benjamin Turley, farmer, of Abberley. From the evidence of Mr. Turley it appeared that deceased called upon him on Friday, and asked to be allowed to sleep in his barn. He gave him some food, and told him he thought the best place for him was the union. Deceased said he would not go to the workhouse as he did not like it. He slept in the stable loft, and was seen to go away on the Saturday morning and Mr. Turley did not see anything further of him till Sunday morning about eight o'clock, when he found him dead by the side of an empty cottage near where he had slept on the previous night. Dr. Cook, of Stockton, deposed that death was caused by an attack of apoplexy. There was no food in the stomach, and most likely the disease was much accelerated by want and exposure to cold. Verdict accordingly."
"Perished Of Want"
Worcestershire Chronicle : February 17th 1864 Page 4

"An inquest was held Saturday, by the county coroner [Mr. W. S. P. Hughes], at the Royal George Inn, Abberley, on the body of George Blount, collier, who received fatal injuries whilst descending a coal pit on the previous Monday. It appeared from the evidence that deceased, who was 18 years of age, was engaged as draw-boy in No.9 pit at the Post House Colliery. On Monday morning a quantity of water was being drawn out of the pit by means of two barrels and a long rope, one of the vessels being attached to each end. At seven o'clock deceased, in company with another man, got into the barrel which was about to descend, in order to commence work. The rising barrel was almost filled with water. After the workmen had proceeded some distance down the shaft one of the barrels struck against the side of the pit, and the iron handle to which the rope was attached immediately snapped. The unfortunate men were consequently, without a moment's warning, hurled to the bottom of the pit, a distance of about 15 yards. Blount received such injuries that he died in three hours. His companion was also badly injured, but hopes are entertained of his recovery. A verdict of accidental death was returned, and the jury expressed their opinion that great blame was attached to the proprietors of the colliery for neglecting to provide necessary and adequate appliances for the protection of the men engaged in the pit."
"Death in a Coal Pit"
Worcester Journal : October 30th 1880 Page 4