History and Information on Beoley in the County of Worcestershire.

More information on Beoley to follow. I probably created the page as I had a link to Beoley from another page. When building the site it is easier to place links as they crop up rather than go back later on. I realise this is frustrating if you were specifically looking for information on Beoley. There is information on Worcestershire dotted around the website - click here for a suitable starting place. 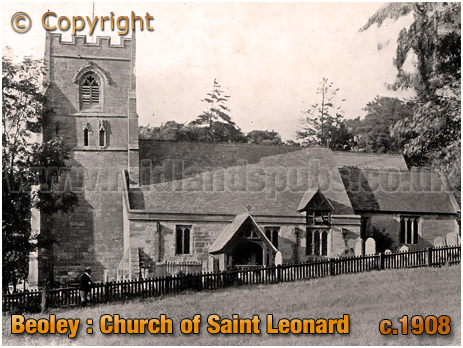 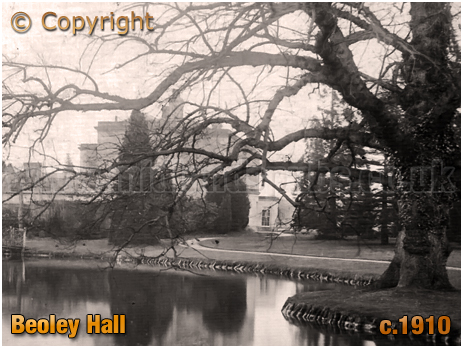 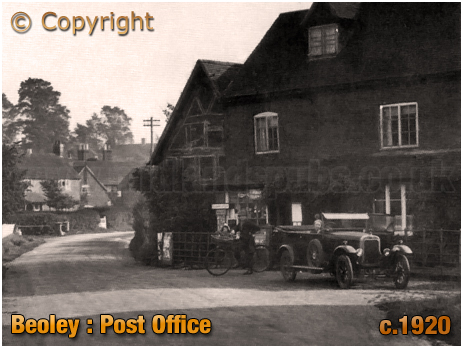 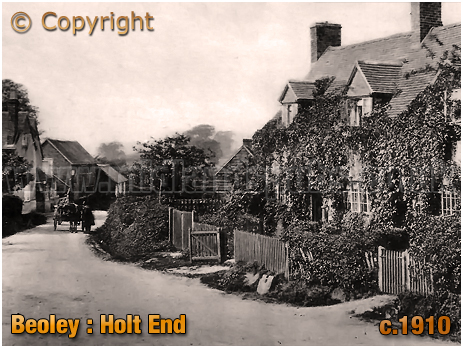 Beoley [properly called "Beaulieu"] is a picturesque village and parish, bounded on the east by Warwickshire, 3 miles north-east from Redditch station on the Birmingham and Redditch section of the Midland railway, 8 east from Bromsgrove and 12 south from Birmingham, in the Eastern division of the county, Upper division of Pershore hundred. King's Norton union, Redditch petty sessional division and county court district, rural deanery of Bromsgrove and archdeaconry and diocese of Worcester. A stream runs through the parish and falls into the river Arrow, near Beoley Mills. The church of St. Leonard is an ancient building of stone in the Early English and Perpendicular styles, consisting of chancel, nave, aisles, south porch and an embattled western tower, with pinnacles, containing 6 bells: the Sheldon chapel on the north side of the chancel, restored in 1891 at a cost of £130, contains many ancient and handsome monuments to members of this family, including the tomb of William Sheldon, who fought for Richard III. at Bosworth Field, August 22nd, 1485, and for a time lost his estate in consequence; it was, however, afterwards restored to him by an art of grace of Henry VII.: there are also two fine tombs with recumbent figures of knights and their dames under richly decorated canopies, said to be the work of Italian sculptors, and erected by Ralph Sheldon to the memory of his immediate ancestors; the crest of the Sheldon family, a "sheldrake," occurs frequently in the heraldic part of the decorations, the rest of the ornamental work, which is very rich, being of the Renaissance period : the stays which supported the banners of the Sheldon fumily still remain on the west wall, but the banners themselves have long since disappeared : the chapel contains a stone altar and a fine east window of the Late Tudor period, perhaps unique : the remains of many of the Sheldons lie in a vault underneath the mortuary chapel: there is a brass to Francis Sheldon, ob. 1631 : the church was partially restored in 1885, and again in 1891, at a total cost £1,450, and affords sittings for 240 persons, 100 being free. The register dates from the year 1538. The living is a vicarage, net yearly value £60, including 2 acres of glebe, with residence, in the gift of Mrs. E. F. Ingram, and held since 1902 bv the Rev. George Walter Clark B.A. of St. John's College, Cambridge. There is a Wesleyan chapel at Holt Hill. The charities are comprised in the interest of £100. Here still remain some traces of an ancient castle. Beoley Hall, the seat of Mrs. Ingram, stands in a fine lawn, tastefully planted with shrubs. The manorial rights are divided. Mrs. Cheape, of Bentley Manor; John Boultbee Brooks esq. of Finstall Park, and Sir William Jaffray bart, of Skilts, are the principal landowners. The soil is chiefly marl; subsoil, clay. The crops are wheat, beans, peas, oats and occasionally barley. The area is 4,694 acres of land and 22 of water; rateable value, £6,267; the population in 1901 was 565.

"Plans are being made to demolish Beoley Hall, at Beoley, near Redditch. The hall belongs to Mr. H. Maynard Mitchell, a director of Mitchell's & Butler's, the brewers, who has come to this decision because extensive dry rot has been found in the early Georgian building. Mr. Mitchell has lived in the 12-bedroomed hall for seven years. It is in 20 acres of its own grounds next to Beoley Church. Bromsgrove Rural Council yesterday agreed not to object to demolition. It was stated that the owner considered that necessary remedial measures would be uneconomic. The hall is listed as a building of special historic or architectural interest and the proposal had been referred by Worcestershire County Council to the Minister of Housing and Local Government, Mr. Greenwood. Consultant architects are to inspect the hall for the county council. Mr. Mitchell was not available yesterday. The former owner of the hall, Mr. Robert Griffin, who also lives at Beoley, said: "The plan to demolish the hall is a great shock to me because it is so beautiful. I believe it was rebuilt on the site of the first hall which dated from the 14th century."
"Plans to Demolish Beoley Hall"
Birmingham Daily Post : October 12th 1866 Page 17

If you have a genealogy story or query regarding Beoley you can contact me and I will post it here in addition to including your message within the website pages for Worcestershire Genealogy.

If you would like to share any further information on Beoley - perhaps you drank in one of the pubs in the past? Or maybe knew a previous publican running one of the boozers? Whatever the reason it would be great to hear of your stories or gossip. Simply send a message and I will post it here.