History of the Holly Bush Inn at Gorcott Hill in Beoley in the county of Worcestershire.

Some history of the Holly Bush Inn

The Holly Bush stands on the old Birmingham to Alcester Road. Traffic passing the pub was reduced when the A435 road scheme by-passed the small settlement on Gorcott Hill. Trade is maintained by a combined offering of real ale and dining. The building has traditionally been part of the parish of Beoley.

The Holly Bush Inn, originally a beer house, was run by John and Mary Hutton in the late 1830s when the locale was known as Gorgot Hill. Some of their local customers may have included William Hooman, a farmer at Pink Green, William Ganderton, a plumber who also worked as a painter and glazier, and also the tailor Charles Richards. The majority of the pub's customers toiled as agricultural labourers and sought refreshment in the beer house after a hard day's graft. A rural worker himself, licensee John Hutton was born around 1786 and married Mary Groves at the parish church of Saint Leonard's in September 1814. The couple hired Sarah Bagster as a general servant to help with the chores around the place.

The Holly Bush Inn would have benefited from those travelling along the Alcester Road. A wheelwright named Joseph Powell lived on the premises and no doubt offered repair services to those breaking down on the highway. The farmer Thomas Podmore offered a similar service to those suffering from a wonky wheel. Another farmer named John Allsup also offered his services as a blacksmith from a neighbouring property. Although not serving as a coaching inn, the Holly Bush nonetheless was a welcome port-of-call for travellers. A shop also operated close to the pub. At this time it was kept by Ann Field. A stagecoach would have passed along the road daily as it made its way from Birmingham to Alcester and back. 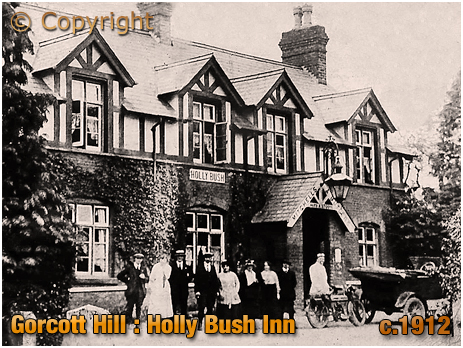 This photograph shows the Holly Bush Inn around the end of the Edwardian period when motorised transport was starting to emerge on the old highway in front of the property. Pubs such as the Holly Bush adapted to the new challenges and opportunities by catering for cyclists and coach parties, offering luncheons with garden facilities, along with other services to supplement their traditional role as an inn.

After a long illness 54 year-old Mary Hutton died in January 1845. She may not have witnessed some of the economic developments taking place in the locality. Early forms of mechanisation were being introduced to agriculture with Job Homer managing a threshing machine. Some local residents found work as fish hook and needle makers, an area of expertise for which the region would become noted. Local people who lived and worked in the fields within the parish were starting to commute to factories in order to earn money. Feckenham-born George Reading provided work for some locals when he established a timber business at Gorcott Hill. 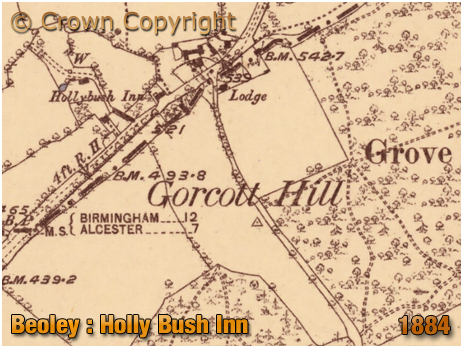 This map extract dated 1884 shows the Holly Bush Inn as part of a cluster of buildings on Gorcott Hill. Indicating that it was 12 miles to Birmingham and 7 miles to Alcester, a milestone was located close to the county border to the south-west of the Holly Bush. A few yards further on, Gorcott Hall was within the parish of Studley in Warwickshire. Part brick and part timber-framed, the house was occupied by the Yardley family in the 16th and early 17th centuries. The property later passed to Edmund Chambers, the descendants of whom lived at the hall until the Holly Bush opened in the 1830s. 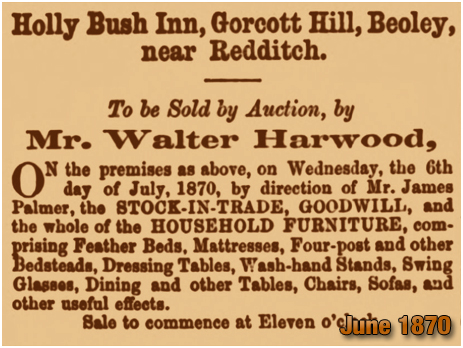 This advertisement for an auction of the Holly Bush Inn appeared in local newspapers in June 1870. It is curious in that it suggests James Palmer was giving up the business. However, he was still in residence during the following year. Perhaps the sale did not go ahead or a reserve price was not met? The sale notice does at least provide a glimpse of the composition of the inn.

In 1871 James Palmer was documented as a 34 year-old beer house-keeper from Birmingham. His wife Ellen, however, was born-and-bred in the parish. Indeed, her full name was Eleanor and she was related to the aforementioned William Ganderton who moved from Gorcott Hill to run the White Lion Inn on Portway in the parish of Tanworth before taking over the Cross and Bowling Green Inn at Branson's Cross. The publican's daughter married James Palmer, the son of a coach builder, at Aston's parish church in September 1858. The couple kept the Bath Tavern on Gooch Street at Highgate in Birmingham before the opportunity arose to move to Eleanor Palmer's spiritual home.

The move back to Beoley did not, for some reason, work out because a newspaper article dated July 15th 1871 stated that James Palmer had left the house for which the Aston brewer William Smith was granted an interim licence. William Box was the publican for a short spell before William Jefferies moved into the premises with his wife Elizabeth. She was the daughter of William and Amelia Ganderton of the Cross and Bowling Green Inn. The son of a County Court Bailiff, William Jefferies grew up in Redditch where he married Elizabeth Ganderton in March 1874. I imagine they were given a helping hand from their parents in order to establish themselves at the Holly Bush Inn. The couple had four children whilst running the pub before William's untimely death on May 31st 1889.

Following the death of her husband, Elizabeth Jefferies re-married in March 1890 to William Whitehouse. He successfully applied for a full licence for the Holly Bush Inn during October 1890. Born in Hampton-in-Arden around 1834, William grew up on his parents farm in Wootton Wawen. He kept farms with his first wife Frances before her death in 1881. With children from two previous marriages, the household became pretty full in the early 1890s.

Elizabeth Whitehouse died in September 1896 whilst at Scarborough. Widower William Whitehouse continued to run the Holly Bush Inn. At the turn of the 20th century he was being helped by his two step-daughters Elizabeth and Harriet Jefferies. Working as a school teacher, his daughter Lizzie also lived on the premises. Tragedy struck in November 1902 when William died after falling down the stairs at the Holly Bush Inn. His accident occurred on a Saturday night and he died from his injuries on the following Monday. The sole beneficiary of his will was his son William Henry Whitehouse who, together with his wife Mabel, kept the Boot Inn at Mappleborough Green.

The Holly Bush Inn was elevated to hotel status during the period when William and Hannah Trevor kept the place during the mid-late Edwardian period. The couple may be featured in the black-and-white photograph [above] in which Mitchell's and Butler's ales are advertised on the woodwork of the front porch. William Trevor was born in Stechford around 1870. Like his father, he learned the craft of confectioner and baker and ran a couple of shops in the Peak Blinder area of Bordesley. He married Hannah Maria Lyndon at Aston in October 1899. The couple had four children before moving out to Gorcott Hill. I believe that they managed a smallholding in later years. At the outbreak of World War Two they were living in Perry Mill Lane. William seemingly had a successful career and left a tidy nestegg to his two sons, William and Harold. The former was a dairyman whilst Harold was a detective inspector in the Birmingham Police Force.

The Beard family were notable hosts during the 1930s and the Second World War. The son of the splendidly-named Marmaduke Valentine Beard and Constance Pugh, Leslie Beard was born in Swansea in 1894. His parents were actually Brummies but I suspect that the location of his birth was something to do with the occupation of his father. In the census of 1891 the former jeweller was living in digs in Northumberland whilst trying to make a career as a flutist. Perhaps he was touring with an orchestra? Residing in the same boarding house was the violinist Isaac Heys Cartmel.

At the end of the Victorian era Marmaduke and Constance Beard were running a beer house on Great Charles Street in Birmingham. Leslie Beard spent his formative years here, along with a spell at the Havannah Stores in The Parade, an Ind Coope tavern run by his parents. Marmaduke Beard went from retailing to brewing - successfully it would seem as he was able to move his family to a large residence on Alcester Road South at King's Heath. In 1926 he took over the Greyhound Inn on Holloway Head which became the brewery tap.

Leslie Beard no doubt learned much about the licensed trade from his parents. In January 1929 he married Alfreda Haddon, daughter of the noted artist David Wood Haddon. He came to live with his daughter and son-in-law at the Holly Bush Inn where he died in his 85th year during October 1941. Leslie and Freda had a son named Peter living with them at Gorcott Hill. The couple employed Lydia Williams as a live-in domestic. Freda Beard seems to have been more hands-on at the Holly Bush whilst her husband became increasingly involved with the brewery established by his father.

In December 1944 the Beard family set up M. V. Beard and Sons, Ltd., a new firm registered as a private company, with a capital of £10,000. This was to acquire the business of brewers, etc., carried on by Marmaduke Valentine Beard at the Greyhound Brewery, Holloway Head. Birmingham. The directors were Marmaduke V. Beard. Constance A. Beard, Arthur V. Beard and Leslie J. Beard. The brewery remained in operation until the mid-1950s when the Greyhound Inn was acquired as an outlet for Bulmer's Cider. Leslie Beard, former licensee of the Holly Bush, did pretty good over the years. When he died at Node Hill in Studley in November 1974 he was the equivalent of a modern-day millionaire.

If you have a genealogy story or query regarding the Holly Bush Inn you can contact me and I will post it here in addition to including your message within the website pages for Worcestershire Genealogy.

If you would like to share any further information on the Holly Bush Inn - perhaps you drank here in the past? Or maybe knew a previous publican? Whatever the reason it would be great to hear of your stories or gossip. Simply send a message and I will post it here.

"Walter Jefferies, Holly Bush Inn, Beoley, was charged with keeping his house open during illegal hours. It appeared from the evidence of P.C. Davies that he saw a person come from the house at abont a quarter to twelve at night. There waa also another man in the house, and there were empty jugs and glasses. The defence was that the night was a very tempestuous one, and that the men had asked permission to remain all night. That they did remain all night was admitted by the police, and the Bench dismissed the case."
"Alleged Breach of the Licensing Act"
Worcester Journal : May 10th 1884 Page 3