History of the Bell Inn at Cradley in the county of Worcestershire.

Some history of the Bell Inn

This beer house was listed as the Blue Bell Inn by the enumerator collecting the data for the 1861 census. However, the 'Blue' element of the name was often dropped or perhaps forgotten and appears as the Bell Inn within other directories. The beer house was located in New Street, a road that led from the High Street down to Lodge Forge. Also known as Bedcoat Street, this was once lined with small cottages occupied by the people who grafted in the chain shops or perhaps in the brick and tile works next to the clay pit just to the east of New Street. Living conditions in many of the households was poor. In one case, there were eleven people living in one house with two bedrooms.

This is the name of the house entered by the cenus enumerator in 1861. At the time the Blue Bell Inn was kept by William and Hannah Bunn, a couple who also operated a provisions shop from the premises. William Bunn had previously worked as a forge man, most likely at Lodge Forge where anchor and chains were manufactured. He obtained a beer house licence for the house on August 27th 1858. 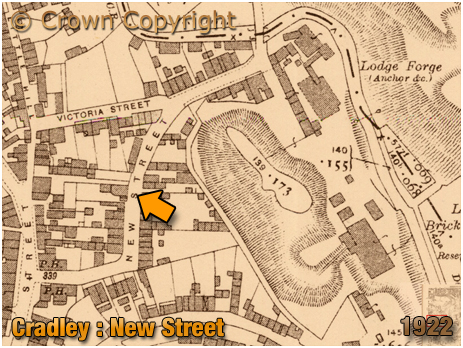 I am not exactly sure where the pub was situated in New Street, a part of Cradley that seems to have been little documented. Not far from the Bell Inn was the Victoria Inn which, I assume, was on the corner of Victoria Street. The census returns suggest that the houses were only a few doors from each other. A sale notice of 1882 stated that there was a "right of road from the High Street" and this may have been from the rear of the building through a gate and into the main road. I would think that the Bell Inn was where I have pointed the arrow on the above map extract but, as I say, this is a suggestion. Note on the map that New Street led down to a bridge that crossed the River Stour and followed a route to the Jolly Collier Inn. The bridge was rebuilt in the early 1920s. Tenders for the construction work were invited by the joint Rowley Regis Urban District Council and Halesowen Rural District Council in February 1921.

William Bunn applied for a full licence on several occasions in the 1860s but was refused by the magistrates.

Hannah Bunn suffered from an illness in the early 1860s and during this time a local woman named Martha Priest, who was continually hanging around the premises, encouraged Jane Bunn, the young daughter of the publican and his wife, to rob money and hand it over to her. This deceit continued over a period until it came to the attention of the licensee who subsequently summoned Alfred and Martha Priest in January 1862. One does have to question the moral compass of Jane Bunn. However, the case seems to show how manipulative the Priest's were in this robbery. The Mrs. Adams featured in the case was the daughter of William and Hannah Bunn. She was married to the carpenter Joseph Adams who also lived on the premises.

The lease of the Bell Inn was advertised in April 1881 and it would seem that Benjamin Homer was tempted to give it a go. By this time William Bunn, a widower, was working as both publican and shingler. His successor, Benjamin Homer, also worked as a shingler. He was recorded at the Bell Inn during 1881 in which the house was numbered 34. If the numbering remained consistent down the years, this was on the eastern side of New Street - just below where the arrow is on the map extract dated 1922.

Benjamin Homer kept the Bell Inn with his wife Martha. The couple had previously lived across the county border near the gas works at Cradley Heath. They only held the Bell Inn on an annual lease, as indicated in the sale notice of the property dated 1822. 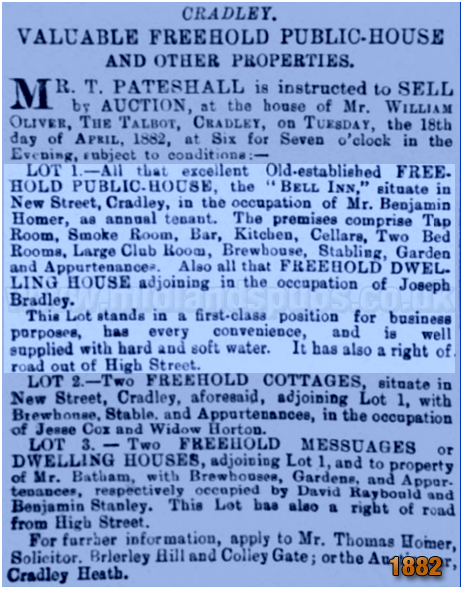 This sale notice does at least provide us with an impression of the beer house which featured a tap room, smoke room, bar and a large club room. The notice includes details of adjacent lots, one of which adjoined property belonging to Mr. Batham, presumably Daniel Batham who, along with his wife Charlotte, was running the White Horse Inn on the High Street.

Joseph Westwood was running the Bell Inn during 1884. In January of that year he was hauled in front of the magistrates on a charge of permitting drunkenness on December 22nd 1883. However, with Mr. Waldron handling his defence, the charge against the publican was dismissed.

If you have a genealogy story or query regarding the Bell Inn can contact me and I will post it here in addition to including your message within the website pages for Worcestershire Genealogy.

If you would like to share any further information on the Bell Inn - perhaps your ancestors drank here in the past? Or had some link with a previous publican? Whatever the reason it would be great to hear of your stories or gossip. Simply send a message and I will post it here.

"At the Police Court on Friday, before C. E. Swindell, J. Hunt, and W. E. Firmstone, Esqrs., Alfred and Martha Priest [husband and wife] were charged with having feloniously received 19s. 6d., the money of William Bunn, of Cradley, knowing the same to have been stolen. The prosecutor is a publican, at Cradley and also keeps a provision shop. The male prisoner is a chainmaker at the same place. The public-house was managed by his wife, and the provision shop by his daughter, Mrs. Adams. Complainant had a daughter, aged 13, and she had been tutored by the defendant and his wife to convey away sums of money. This had been proceeding for ten months, during which Mrs. Bunn had been ill. Mrs. Priest had been in the habit of being in the house continually, and knew where the money was kept. She had induced the daughter, to go to those places and take the money, and then give it her. Jane Bunn, the girl in question, proved having, front time to time, stolen money belonging to her father, and given it to one or other of the prisoners. The robbery had been committed in an ingenious manner. After consulting, the Bench said that there was no evidence against the woman of having received the particular sum specified in the charge, but Alfred Priest they should commit for trial. Mr. Swindell said they were of opinion that the wife was as bad, if not worse, in having corrupted this child in the first instance. Fortunately for her the summons only comprised one certain charge of taking 19. 6d., which she did not appear to have taken, but that she had received other sums they were quite satisfied. The woman then left the dock."
"Singular Case of Receiving Stolen Money"
Worcestershire Chronicle : January 8th 1862 Page 4

A couple of newspaper items related to New Street rather than specifically the Bell Inn.

"At Old Hill, yesterday, William Parsons, Little Hill, Cradley; Philip Dunn, New Street, Cradley; Lewis Perry, New Street, Cradley; Thomas Raybould, Birch Coppice, Quarry Bank; Horace Bloomer, New Street, Cradley, and George H. Grove, Spring Lane, Cradley, were summoned for smoking in a tramcar, and also using offensive language. Mr J. A. Sheppard prosecuted on behalf of the Dudley and Stourbridge Tramway Company, and said the men behaved like hooligans. They travelled by a car leaving Blackheath at 10.45 p.m. on Saturday week, and when requested not to smoke by the conductress, insulted her. Defendants admitted smoking, but denied using any bad language. They were fined 10s. each for smoking and 30s. each for using offensive language, the Chairman remarking that the defendants had behaved in a disgraceful, unmanly way."
"Disorderly Tram Passengers"
Birmingham Daily Post : August 3rd 1916 Page 2 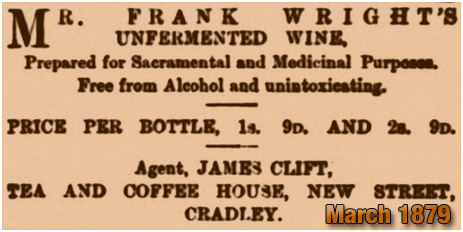 "At Old Hill Police Court on Wednesday, Bertha Williams [14], New Street, Cradley, was summoned for stealing coal, the property of the Stour Colliery Co., Cradley Heath. P.C. Cartlidge said at 4.13 on the 3rd inst. he visited the colliery and saw the girl taking coal from the wharf. On seeing witness she ran away, leaving a bag of coal, which was subsequently valued at 8d. On February 5th he saw defendant, who, in reply to the charge, said, "Yes, it is right." The parents were ordered to pay a fine of 10s."
"Coal Stealing"
Dudley Chronicle : February 17th 1917 Page 7