History of the Black Horse at Overend in Cradley in the county of Worcestershire.

Some history of the Black Horse

The Black Horse was located in Banners Lane, just off Overend Road. I have used a relatively recent map extract to show the building's location in relation to the iron foundry that helped boost trade in the jug department and when the hooter sounded at the end of the shift. The Bull's Head Inn stood around the corner and the building at the western edge of the map was once the Sun Inn. 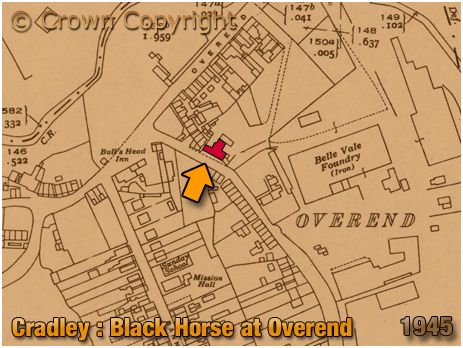 For many years George Billingham was a horse slaughterer at the blacking mill close to the River Stour. I do not know if this was the reason for the pub being named the Black Horse. The inn sign is widespread throughout the country. It dates from at least the fourteenth century and its prevalent use is thought to be because it was easy and convenient to use as a visual symbol. Pub signs were often carvings and the horse would have been a common subject. The name of the Black Horse had, by the seventeenth century, become the nickname of the 7th Dragoon Guards who wore black collars and black cuffs on their jackets. 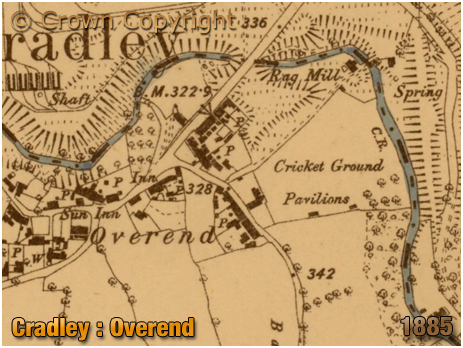 The second map extract above dates from 1885 and shows that the land occupied by the iron foundry was once a cricket field. Following redevelopment in the new millennium, the roads commemorated this with street names such as Century Way or Batsman Close. Although mentioned as early as 1875, I do not know too much about the early days of cricket in Cradley. By the end of the 19th century there was a team called Colley Gate Cricket Club which held meetings at the Talbot Hotel, an establishment used as their headquarters. Ernest Garrett was the president of the club at this time and Mr. J. Hickman was the secretary. The photograph below is much more recent, possibly 1930s but maybe just after the war. I acquired this a few years back but, frustratingly, no names were written on the back of the card. 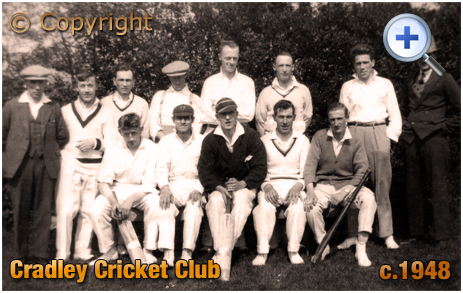 Samuel Jones is listed as a beer retailer in Banners Lane within Kelly's trade directory published in 1884. His position within the census ties in with subsequent entries and was in roughly the same place at Banners Lane. He was probably the same Samuel Jones recorded in the census three years earlier as a chain and anchor smith. In 1882 he was charged with assaulting George Cartwright, a fellow-workman at Messrs. Hartshorne in Netherton. Apparently, it all started with Jones throwing a snowball at Cartwright. However, when the latter remonstrated with him, Samuel Jones struck him on the head, knocking him down and cutting his head on some chain. George Cartwright required stitches in a head wound. When Samuel Jones appeared in front of the magistrates, The Bench considered that a severe assault had been committed and imposed a fine of 20 shillings and costs, or one month's hard labour. 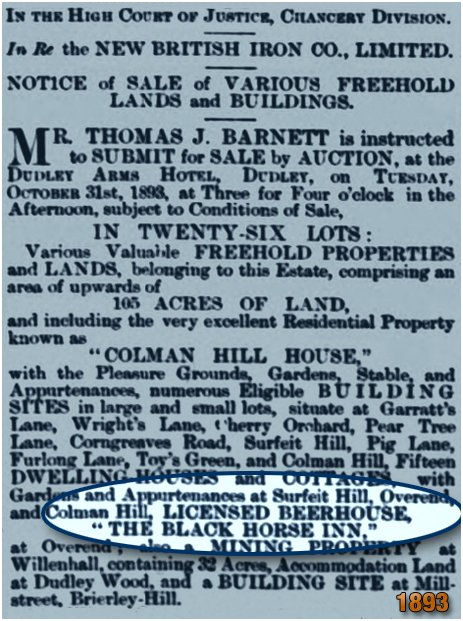 This sale notice shows that the Black Horse Inn formed part of the estate held by the New British Iron Company of Corngreaves. A winding-up order of the business had been made in June 1892 but in September the company resolved to go into voluntary liquidation. Consequently, the assets, including land and buildings were disposed at auction in separate lots. This probably marked the start of brewery ownership of the Black Horse.

The Netherton-based brewery of John Rolinson and Son Ltd. operated the Black Horse Inn during the late 19th and early 20th centuries. The beer house was acquired by Wolverhampton & Dudley Breweries Ltd. in 1909. The company were responsible for the building that fronted Banners Lane during the rest of the 20th century. The building was a simple but attractive red-brick structure with minimal dressings. The building plans for alterations were approved by Stourbridge magistrates in 1911.

Elijah Emery had his 'last drop' in the Black Horse in April 1900. The 38-year-old local resident worked as a mill-furnaceman at the Round Oak Steel Works. He had met his brother James and they went for a few pints in the Bull's Head just around the corner. There they had a reported five pints of brewery beer. They came into the Black Horse Inn and shared a quart of ale before Elijah set off home for his dinner. However, he went into the back yard and stumbled over some stones that the children had been playing with. He fell over very awkwardly and could not get up. He had actually sustained a compound fracture. With help, his daughter Sarah Ann carried him back into the house. Dr. White was sent for before he was conveyed to the Guest Hospital at Dudley. He was detained for two days but his restlessness, caused by delirium tremens, resulted in his leg becoming infected. The surgeons decided to amputate in order to save his life but he later died from blood poisoning.

John and Maria Homer were running the beer house in the early 20th century. They were employed as managers by John Rolinson and Son Ltd. rather than occupying the house as tenants. They would later move to Park Road where Maria ran a boarding house whilst her husband worked as a chainmaker. 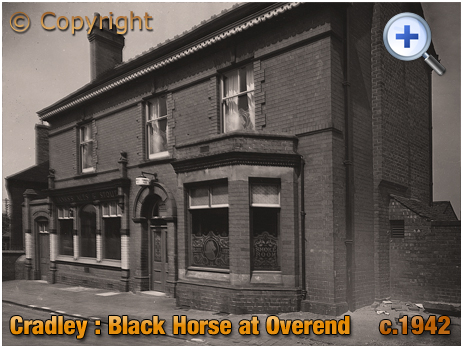 William Palmer was the licensee when this photograph was taken in the early years of World War Two. His name can be seen above the front door. The lettering in the etched-glass shows that the smoke room was located on the right. William and Amelia Palmer moved into the Black Horse during 1915 and they remained as hosts for a generation. Bill Palmer had previously worked as an anchor smith. He married Amelia Raybould at St. Peter's Church in 1906. The couple would become the longest-serving hosts at the Black Horse. Bill Palmer died in 1942. Amelia took over the licence until the end of the Second World War. Marrying again in 1950 to Walter Evans, she lived until the age of 87 when she passed away in 1972.

It was not until February 3rd, 1948 that a full licence was granted for the Black Horse. In this year Frank Perkins handed over the keys to Martin Barnsley. 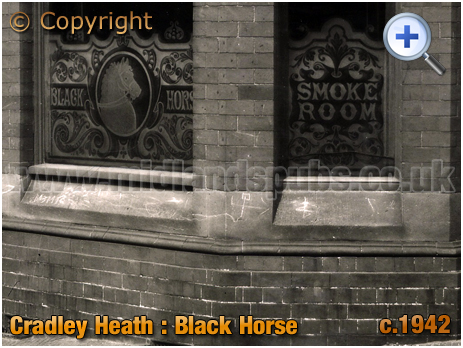 Ted Allen had the distinction of being licensee of both the White Horse and the Black Horse. He moved from the High Street to Banners Lane in 1961. It was during his time as host that Stourdell United F.C. was formed and based themselves at the Black Horse. The club was managed by "Pop" Osborne, a former cartoonist for the Sports Argus. Bert Totney, a former Two Gates player, became the Stourdell trainer. Four of the 39 players who signed up for Stourdell United were singled out for praise by "Pop" Osborne; Roy Swain, Michael Stevens, Ken Attwood and Winston Harris were a great help in forming the club. 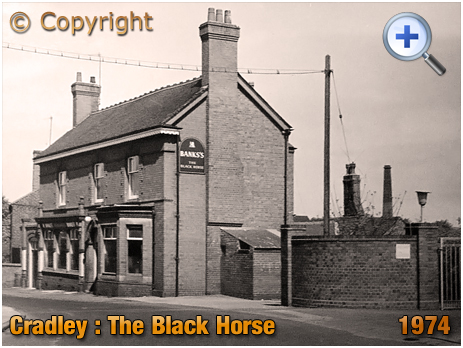 The Black Horse can be seen here in 1974 next to the gates of the Belle Vale foundry. This was the site of the Henley and Oakley Brothers' works where metal casting was undertaken for more than 70 years. 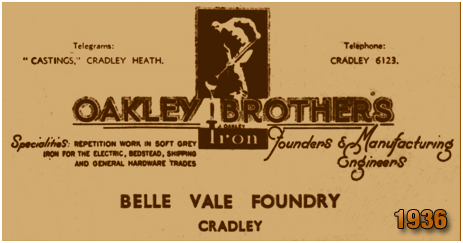 When I visited the Black Horse in January 2000 the walls of the bar were decorated with a large collection of angling memorabilia - a legacy of the fishing club that used the pub years ago. The licensee at the time was Philip Chilton who was in his 25th year in the pub trade.

The Black Horse actually closed down for a period in 2002 and everyone feared the worst. I believe the place hobbled on for a short period trading as The Adventure. The pub was finally demolished in 2012 as part of the Henley Grange housing development. 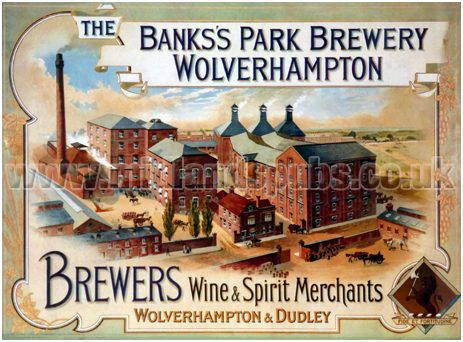 If you have a genealogy story or query regarding the Black Horse can contact me and I will post it here in addition to including your message within the website pages for Worcestershire Genealogy.

If you would like to share any further information on the Black Horse - perhaps your ancestors drank here in the past? Or had some link with a previous publican? Whatever the reason it would be great to hear of your stories or gossip. Simply send a message and I will post it here. 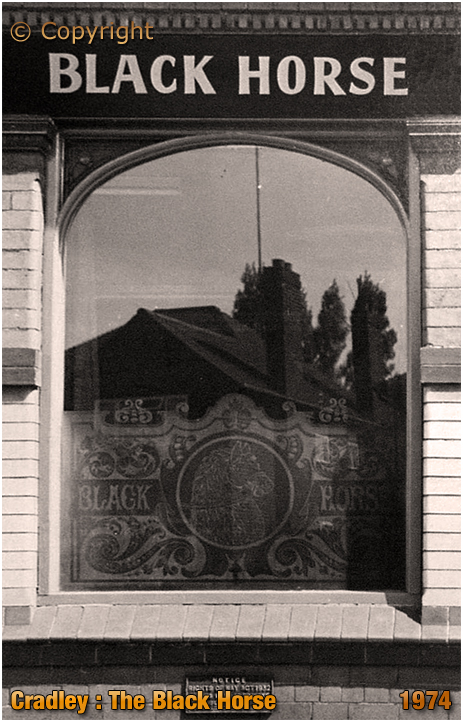 "Mr. A. H. Hebbert, deputy coroner, held an inquest at the Black Horse Inn, Cradley, on Tuesday afternoon upon the infant child of Thomas Barnsley Nock, puddler, of Mill Street. The child was born on Wednesday, the 13th inst. and during the day he became very restless, and cried. The midwife, a Mrs. Gretton, wishing to give it castor oil, sent Mrs. Barnsley's little girl, aged 5 years, to fetch the bottle from the kitchen. The grandmother, Mrs. Emma Barnsley Nock, an old lady aged 70, said to be illiterate, was in the kitchen at the time, and gave the girl what she thought was the bottle of castor oil from the mantelpiece, but as a matter of fact, handed her a bottle containing 'oil of tar' which was so labeled, and also with the word 'poison,' which was on the mantelpiece together with the bottle of castor oil. The child took the bottle upstairs, and gave it to her mother, who gave it a dose of its contents to the infant. Instead of getting better, the child got worse, and on the mistake being discovered, Dr. de Denne was called in, and attended the infant until Saturday morning, when it succumbed to the effects of poison. Evidence was given bearing out theses facts. P.S. Clark said he took possession of the bottles, and found them to be of similar size and shape. Dr. de Denne said there was no need to give the child castor oil so soon. The Coroner in summing up, said it was clear the old lady should have taken more care. It was plainly a mistake, and, therefore, the jury should return a verdict of Accidental Death. The jury returned this verdict, but the Foreman said they thought the coroner should censure the grandmother. The coroner called the grandmother in, and said it was rather neglectful on her part, and told her to take more care in the future."
County Express : November 23rd 1901 Page 2 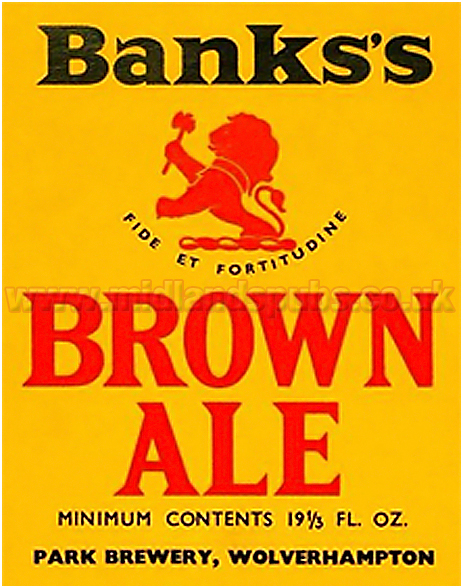