History and Information on Hanley Castle in the County of Worcestershire.

Some history of Hanley Castle 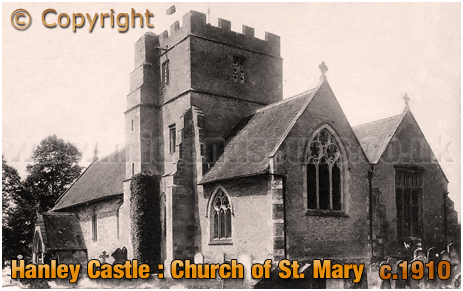 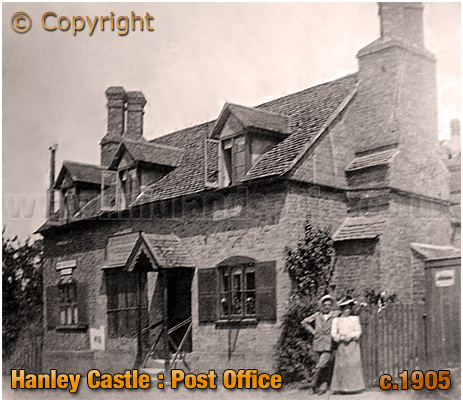 If you have a genealogy story or query regarding Hanley Castle you can contact me and I will post it here in addition to including your message within the website pages for Worcestershire Genealogy.

If you would like to share any further information on Hanley Castle - perhaps you drank in one of the pubs in the past? Or maybe knew a previous publican running one of the boozers? Whatever the reason it would be great to hear of your stories or gossip. Simply send a message and I will post it here.

"Michael Bearjonie, 24, image moulder, was charged with stabbing William Bendle, Hanley Castle, on the 7th of February last. Mr. Cooke appeared for the prosecution; and Mr. Huddleston defended. Mr. Cooke, having stated the facts of the case to the Jury, called William Bendle, who deposed : I am a labourer, living at Hanley Castle. I overtook the prisoner between Malvern Wells and Hanley Swan, on the evening of the 7th ult. He had a board of images on his head. He was dancing about by the side of the road. He threw his images down, board and all. I said, "I will pick them for you," and did so. They were most of them broken. I put them by the side the road, and he kicked them. I then put the pieces into my smock-frock, and we moved on towards Upton, till we came to Mrs. Pratt's public-house. We had some comfortable chat on the way there, and he said he would pay for a pint of cider at the first public-house we came to. He accordingly paid for some cider at Mrs. Pratt's. He said he was going to Upton, and we both got up to leave the public-house together. I had the pieces in my smock-frock, and he kicked at my frock twice as we were going out, and then he struck me twice in the back, but I did not feel that I was stabbed then. We then had a scuffle, and both went down together. I at last let him get up on his promising to be quiet; but when I arose I found I was bleeding from different places. The blood was flowing down both my sleeves and under the ear. I went to Mr. Lewis, the surgeon, and got my wounds dressed. The prisoner then went on towards Upton. Cross-examined by Mr. Huddleston : I had seen the prisoner before I met him in the road, and bought an image off him that morning. I gave him some cider by way of payment for it. Thomas Petford : I am Superintendent of Police at Upton. On the 7th of February I had information of the injuries received by the prosecutor, and I went in pursuit of the prisoner. I found him in bed in a lodging-house. He had a clasp knife in his pocket, which was bloody. His hands were bloody, and also his shirt and trousers. Mr. Henry Marsh : I am surgeon at Upton. I examined the wounds of the prosecutor, and found him bleeding in several places. Under the arm the wound would have been dangerous had it been deeper. The prosecutor has been under my care ever since. The wounds are not quite healed yet. Mr. Huddleston addressed the jury defence, endeavouring to show that his client had no intention to do the prosecutor any grievous bodily harm, and therefore they ought to find a verdict for a common assault only. The Judge having carefully summed up, the jury took considerable time to consider the case, and at last returned a verdict of guilty with intent to bodily harm, and the prisoner was sentenced to eighteen calendar months' imprisonment."
"Stabbing at Hanley Castle"
Worcestershire Chronicle : March 12th 1845 Page 2