History and Information on Himbleton in the County of Worcestershire.

In Littlebury's Directory published in 1879 Himbleton was described as a parish and village within the parliamentary borough of Droitwich, being distant 5 miles S.E. of that town, and 7 N.E. of Worcester; is in the eastern division of the county and hundred of Upper Halfshire; highway district of Upton Snodsbury; union, county court district, petty sessional division, and polling district of Droitwich.

The directory continued to say that the soil in the parish was principally clay, producing wheat, beans, etc. In this year Lime-burning was carried on to a considerable extent by Messrs. Rawson H. and Alfred W. Godard, of Tibberton. Himbleton was recorded as being in the diocese and archdeaconry of Worcester and rural deanery of Droitwich; living, a vicarage, value £140, derived from 113 acres of glebe and small money payments in lieu of tithes, and there was a vicarage house; patrons, the Dean and Chapter of Worcester; vicar, Rev. Henry David Woodhouse, M.A., Christ's College, Cambridge, who was instituted in 1865. 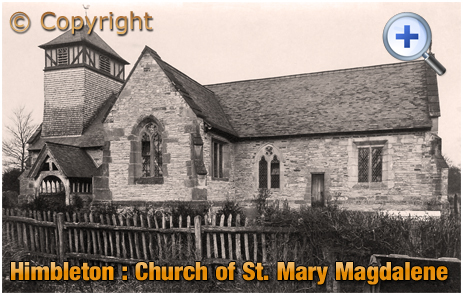 In 1879 the Church of St. Mary Magdalene was described as an ancient edifice with chancel, nave, north aisle, south chapel, wooden porch, and tower, containing four bells. It was recorded that there was Norman, Early English, and Perpendicular work here, with fragments of old glass containing the invocation "Ora pro nobis." A south transept called the "Shell Chapel" belonged to the hamlet of Shell. The register begins with the year 1713. All the charities, according to the directory, had been lost. The national school for 68 children, with teacher's residence, was built in 1873 for Himbleton and Shell. Phepson is a hamlet 1 mile N.; Dunhampstead is close to Oddingley, 2 miles N.W.' Shernall Green is 2½ N.W.

Shell, formerly a hamlet in Inkberrow, is discussed separately in Littlebury's Directory published in 1879 because it was once a separate parish until 1884. However, worshippers went to church at St. Mary Magdalene where there was a dedicated chapel for Shell. In 1879 the hamlet was in the eastern division of the county and hundred of Middle Oswaldslow; highway district of Upton Snodsbury; union, county court, polling district, and petty sessional division of Droitwich; The annual rateable value was listed at £434; the area of the parish was 264 acres, with a population of 52 in 1861. In this year Shell had 11 inhabited houses but only two farms. Edward Bearcroft, Esq., of Mere Hall, was lord of the manor and owner of the land.

By 1912 was Himbleton was described as a village and parish, 6 miles south-east from Droitwich station on the Great Western railway, 3 miles south-south-east of Dunhampstead goods line station and 4 miles south-east of Droitwich Road goods station, each on the Midland railway, 7 north-east from Worcester and 120 miles from London, in the Mid division of the county, Middle Oswaldslow hundred, Droitwich petty sessional division, union and county court district, rural deanery of Droitwich and archdeaconry and diocese of Worcester. A stream called "Bow Brook" runs thraugh the village. The church of St. Mary Magdalene is an ancient building of stone, in the Early English, Decorated and Perpendicular styles, consisting of chancel, nave, south transeptal chapel, north aisle, wooden south porch and a western tower of wood containing 4 bells : many fragments of old glass still linger in the windows : over the east window are the Royal Arms of Queen Elizabeth, painted on the plaster: in the chapel is a flat slab of cast iron, with an inscription to Philip Fincher, ob. 1660, and his wife, ob. 1690 : the communion plate includes a cup, dated 1656, the gift of Mr. John Fincher: there are 160 sittings. The register dates from the year 1713. The living is a vicarage, net yearly value £290, including 115 acres of glebe, with residence, in the gift of the Dean and Chapter of Worcester, and held since 1911 by the Rev. Clement Ernest Newcomb M.A. of Queen's College, Oxford, who is also vicar of Huddington. Various charities bequeathed to the poor of the parish are now lost. Himbleton Manor, which commands an extensive view of the neighbouring country, including the Malvern Hills, is the seat of Mrs. Gascoyne. The Ecclesiastical Commissioners are lords of the manor. The principal landowners are the Ecclesiastical Commissioners, Col. Edward Hugh Bearcroft C.B., J.P. of Mere Hall, Hanbury, and Mr. H. C. Wills esq. 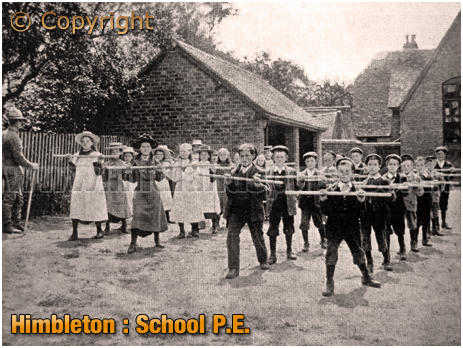 If you have a genealogy story or query regarding Himbleton you can contact me and I will post it here in addition to including your message within the website pages for Worcestershire Genealogy.

If you would like to share any further information on Himbleton - perhaps you drank in one of the pubs in the past? Or maybe knew a previous publican running one of the boozers? Whatever the reason it would be great to hear of your stories or gossip. Simply send a message and I'll post it here.

"My name is Joseph Norman Kidd and I am the Grandson of Alfred Edward Norman, formerly of Oak House Farm, Himbleton where he farmed from approximately 1935-1951. When he retired from Oak House he built 'Shelsley' at the top of the lane on which stands The Galton Arms. It is no longer called 'Shelsley' and has been added to quite extensively. When it was built building regulations applied for size of rooms because of the shortage of building materials after the Second World War. I have stayed many times at Oak House and always loved it. It had a beautiful orchard on the right of the house which came out into the lane higher up the lane. Granddad used to have his cider made by Bulmer's and have it barrelled and kept in the cellar. At that time 1938-9 Mrs. Mound had a little shop at the side of the Galton Arms and I used to walk across from Oak House, across the field opposite to buy sweets - I think her husband may have owned the Galton Arms?. Walking this way I passed the very imposing iron gates behind Himbleton Manor or Court. They must have been taken for the war effort because of shortage of metal for aeroplanes etc. Granddad is buried in the Churchyard of St. Mary's Himbleton just through the Lych Gate nearly opposite the church door and his picture was in the church in his uniform wearing his Sam Brown belt as Garrison Sgt. Major Worcestershire Imperial Yeomanry. My son lives in Droitwich and I have visited him regularly until the Covid-19 lockdown. I am 91 now and have been visiting since 1935 so time is getting on."
Joseph Norman Kidd, June 10th 2020.

"Many thanks for sharing your evocative memories of Himbleton. I loved reading your message and trying to picture Himbleton of yesteryear.
Kieron. 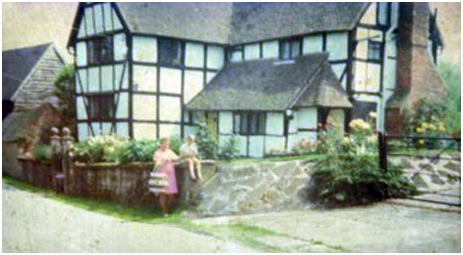 "Glad you found my memories intersting, I have just found this photo taken with my wife and Simon, this was the first alteration to the drive by the owner at that time. Grandad's old barn was further down the lane and is now a house. My Step Aunt was Phylis Norman who taught music to many people around the area. She was also Organist at St Mary's and I believe Grandad was a Church Warden many years ago. We used to take the milk in churns into Worcester by trailer to be processed. Happy days."
Joseph Norman Kidd, June 11th 2020.

"A few weeks ago a good deal of excitement was occasioned at the village of Himbleton, near Droitwich, by the death of a young lady named Huband, aged 20, the adopted niece of the Rev. J. Vernon, curate of Himbleton, who expired on the 7th October, after short illness, during which she was unattended by a medical man. It seems Mr. Bishop, surgeon, of Worcester, who attended the family, had been sent for in the morning by Mrs. Vernon, but was unable to get to Himbleton until the evening, when he found Miss Huband dead. From the symptoms as described to him Mr. Bishop came to the conclusion that she had died from bilious cholera, and she was buried. Some time afterwards, however, a rumour got abroad to the effect that she had been poisoned, and accordingly the Coroner of the district, Mr. W. S. P. Hughes, ordered the body to be disinterred and examined by a medical man. It was then discovered not only that the deceased had died from poison, a large quantity of arsenic being found in the intestines and stomach, but that she was six months gone with child. At the inquest a young carpenter of the village, named Cole, admitted that he had been on intimate terms with the deceased, and that he wished to marry her, but his friends objected. It came out that the servants at the rectory connived at the acquaintance, and that Cole used to visit Miss Huband in the kitchen and back premises with the knowledge of the servants, but unknown to the master or mistress. Mrs. Vernon had heard rumours of the intimacy of her niece with Cole, but Miss Huband had always denied it to her aunt. A quantity of arsenic was found in a cupboard at the rectory after the deceased's death, but Mrs. Vernon and the servants at the inquest denied all knowledge of it. The inquest ended in a verdict that the deceased had died from the effects of poison, but how administered there was no evidence to show. The result has by no means satisfied the public mind, and, other rumours having got abroad as to the cause of the deceased's death, the magistrates of the district determined to re-open the investigation. Accordingly some magistrates have been sitting here yesterday and today, the Right Hon. Sir J. S. Pakington in the chair, for the purpose of making a preliminary inquiry into the circumstances. A great number of witnesses have been summoned on the inquiry, and have been examined, but, the magistrates having decided to conduct the inquiry privately, we are not in a position to go into details. The result of their deliberations will be made public at the close of the inquiry."
"Mysterious Poisoning Case at Himbleton"
Western Daily Press : January 11th 1864 Page 2

"An inquest was held before Mr. Brown, Deputy Coroner, yesterday, at the Polioe Station, Himbleton, concerning the death of John Thomas, who was found dead in a lime kiln at Himbleton on Wednesday morning. The deceased, who was qnite sober, had to pass by Mr. Godard's lime kiln, which was about 30 yards from the road on his way home. The jury returned a verdict "That the deceased was accidentally killed."
"Fatal Accident at Himbleton"
Worcester Journal : October 15th 1887 Page 5

"Mr. William Gould, while lately digging in his garden at Himbleton, where he was sinking a gravel pit, came upon human bones, about two feet below the surface. A thigh bone, two leg bones, and what are thought to be bones of the feet were unearthed. Mr. Gould, in talking of the event, appears to have imagined, like the scientist, the whole skeleton, and Himbleton has been agog with reminiscences and additional finds in connection with the Oddingley murder. The vicar, believing that a complete skeleton had been found, notified Inspector Dunn, at Droitwich, who satisfied himself that it was only the bones of a leg, and these estimated at 100 years of age. He has not called in the services of the Coroner, and the gruesome discovery will probably remain in the minds of the public as the results of amputation in the village in olden times, although many may still believe more tragical and ghastly details are associated with Gould's discovery."
"Gruesome Find at Himbleton"
Worcestershire Chronicle : July 11th 1903 Page 1