History and Information on Lindridge in the County of Worcestershire.

Some history of Lindridge

Lindridge is a funny old place. The ancient church has long gone and the Victorian replacement stands is relative isolation. There is no nucleus of an ancient village, though a cluster of buildings stands at Eardiston. It is what one could offer as a model example of a scattered parish. The River Teme is a natural boundary to the south and the Marl Brook acts as part of the boundary to the north.

The parish of Lindridge includes the hamlet of Broombank and the more populated Frith Common which extends towards Menithwood. The latter was a part of the parish until ecclesiastically annexed to Pensax in August 1879. It is perhaps a surprise to the visitor that coal was extracted from this area in the past. This was a key reason for the construction of the ill-fated Kington, Leominster and Stourport Canal to the north of the parish along the route of the Marl Brook. As the latter's name suggests, some brick-making also took place around Lindridge.

Lindridge was on an important route from Tenbury Wells to Worcester but, apart from at the Nag's Head, this brought only a little pub trade. The Broom Inn also enjoyed passing trade as it stood on the road to Bewdley. The New Inn and Paul Pry were more isolated up the hill at Frith Common, though the New Inn was once a port-of-call for charabanc and coach parties. 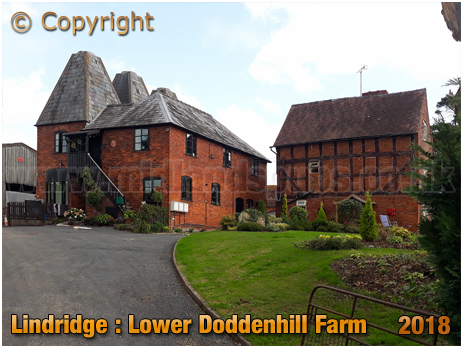 Hop growing remains an important part of agriculture in the parish, notably at Little Lambswick Farm. Hop processing is also conducted at the Mill Lane Industrial Estate. Dotted around the parish are old oast houses, or hop kilns, with which individual farms conducted their own hop drying. Featuring a cowl in the conical roof, the surviving oast houses remain as important examples of vernacular architecture. Often, as in the above example, the surviving roofs have been capped but the distinctive buildings are easy to identify. Worcestershire, along with neighbouring Herefordshire, is littered with former oast houses as they were prime hop-growing counties that rivalled Kent and East Sussex in terms of volume of production. 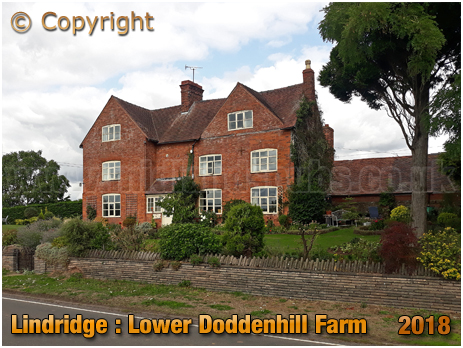 This view shows Lower Doddenhill Farm from the main road. It is a well-maintained property. The hop farmer residing here in the late 19th century was Solomon Yarnold. He had farming in his blood as his parents had managed a large acreage at Clifton-upon-Teme. Following his retirement, he and his wife Elizabeth moved to a house in Newnham Bridge though Doddenhill Farm remained in the hands of the Yarnold family. 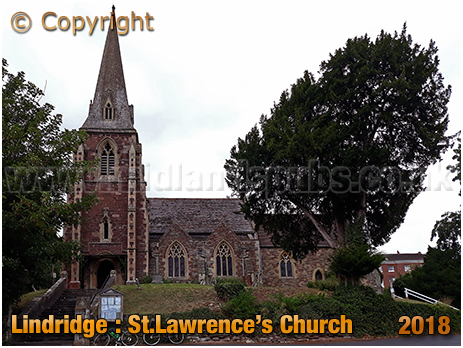 The Church of Saint Lawrence is a building of stone in the Decorated English Gothic style. It was erected on the site of an older church through the efforts of the rector, the Rev. C. W. Landor, and Sir William Smith of Eardiston House. It was designed by Thomas Nicholson, the Hereford architect responsible for many churches in Wales. The church it replaced was itself a replacement as the older church dedicated to All Saints' was ruined by fire in the 17th century. When the church re-opened in the autumn of 1861 it was reported that "dilapidation and positive decay had so destroyed the stability of the old church, and modern interpolations had so effaced all the architectural character it may have anciently possessed, as to render any attempt at restoration utterly hopeless, much as it might have been desired."

A steep hill from Doddenhill Farm passes Brickyard Cottages, a legacy of the brick-making industry at Lindridge. Charles Bevington was running this business in the 1880s. A footpath from the old brickworks to the old mill at Woodston is still in existence. 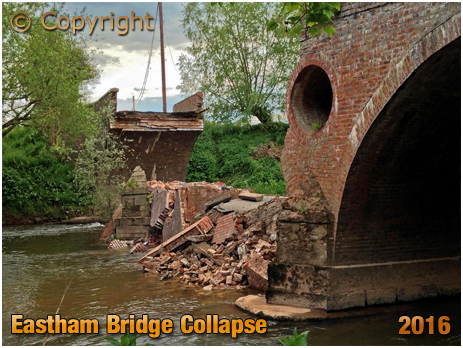 An important transport link across the River Teme between Eastham and Lindridge was broken in May 2016 when the 18th century bridge collapsed. Erected in 1793, Eastham Bridge was one of the last bridges in Worcestershire on which a toll was levied. The County Council acquired the bridge in 1898 and thereafter it provided a river crossing free-of-charge. 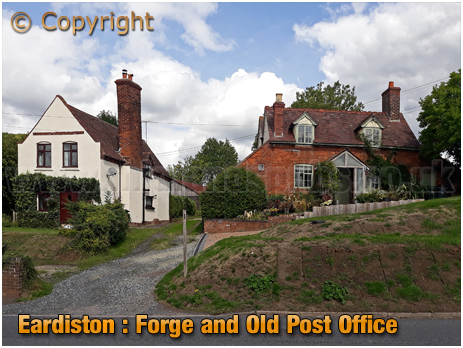 The former forge and old post office stand side-by-side at Eardiston. In the above photograph, the former post office is on the right. Elizabeth Price was the sub-post mistress in the 1880s. The widow lived on the premises with her son and daughter. John Price worked as a farm labourer whilst his sister Elizabeth earned money as a sewing mistress. She married Herbert Element who moved into the cottage, eventually taking over as sub-post master. In the late Victorian period James Francis operated the forge next door. His son George became a baker but he probably undertook this work across the road in the village shop.

From Eardiston there is a lane that goes down to the former Meadows Mill. This building has been converted into a holiday cottage in recent times. A mill was recorded at Lindridge in the Domesday survey and probably occupied the same site. This particular building operated until the late Victorian period. The last miller was probably Joseph Brazier. A small occasional ferry service once operated next to the mill. The service was revived during the First World War and used to transport German prisoners-of-war billeted in Eardiston but used as labourers on the other side of the River Teme on farmland in Eastham.

Eardiston House was once the seat of Sir William Smith, the third baronet of that family. He was the eldest son of Christopher Sydney Smith, the second baronet, by his marriage with Mary, daughter of the Rev. Robert Foley of Oldswinford. He was born in October 1823, and succeeded his father in the baronetcy in 1839. He was a Magistrate and Deputy-Lieutenant for Worcestershire, and formerly a captain in the Worcestershire Yeomanry Cavalry. He married in 1843 Susan, daughter of Sir William George Parker. His estate was purchased shortly before 1868 by Colonel George Wallace who, together with his three sisters operated a highly successful farming operation, employing many people in the parish. This agricultural enterprise lasted only a few years following the death of the last sister. The estate was broken up in 1956. This included the sale of Eardiston House which was eventually converted into apartments in the 1990s.

If you have a genealogy story or query regarding Lindridge you can contact me and I will post it here in addition to including your message within the website pages for Worcestershire Genealogy.

If you would like to share any further information on Lindridge - perhaps you drank in one of the pubs in the past? Or maybe knew a previous publican running one of the boozers? Whatever the reason it would be great to hear of your stories or gossip. Simply send a message and I will post it here.

"On the night of January 19th or morning of the 20th, a quantity of leather, consisting of five calf-skins and one pair of wax butts, value about £7.10s., the property of Mr. John Rowe, shoemaker, Knighton-on-Teme, was stolen from the toll house at Eastham bridge, where the articles had been placed for their owner by the waggoner, who had brought them from Mr. Buckle, currier, Bewdley. The above were wrapped in a sole hide, together with two or more calf-skins, which were left by the thieves in Mr. Symmond's hop-yard, Eastham Bridge, where they were discovered. The print of shoe was found on the sole hide, very remarkable from the unusual position of the nails, particularly in the heel, which led to the apprehension, by Serjeant Forty and Policeman Checketts of the Worcester county police, of Thomas Haynes, the parish constable of Tenbury [in which capacity he has acted for several years], together with his accomplice a man named Edward Blount, who were fully committed for trial at Tenbury on Tuesday, by the Rev. Charles Turner, and safely lodged in the county gaol by superintendent Taylor, of the Great Witley division."
"Constable Turned Thief"
Wolverhampton Chronicle and Staffordshire Advertiser : February 1st 1843 Page 1

"An order of affilliation, from the 21st October, for 1s. 6d. week, with the costs of the day, was made upon Thomas Barker, blacksmith, of Lindridge, towards the support of the bastard child of Sarah Jones, single woman, also of Lindridge. The mother in this case bore a disreputable character, this being the third child and the second alleged to belong to Barker. Mr. J. B. Fuller, solicitor, conducted defendants's case, and questioned Jones as to intimacy existing between her and Frederick Butler and also one William Tunks, but this she denied, and called Ann Jordan, who occupied part of the same house, as her witness. Jordan when called upon apologised to the magistrates for her freedom, and said she should only "swear to two things." She certainly gave her evidence very reluctantly; but the Bench, after strict investigation into the case, considered the paternity to belong to Barker, and made the order as above, but refused to allow the expenses of midwifery."
"Bastardy Case"
Hereford Times : November 22nd 1845 Page 3

"On Tuesday, James McDonald, 65 years of age, of no fixed address, was brought up in custody, before Messrs. Godson and Wheeler, charged with stealing several articles from Dodderhill Farm, Lindridge, the property of Solomon Yarnold. Mrs. Yarnold identified a screw spanner, a cloth jacket, and two sacks, which had the initials "S.Y." marked upon them. She had used the spanner the previous day. On Saturday, the 1st September, she gave the prisoner some milk, and he sat upon a stone. The spanner had been previously put there by her. When charged by P.C. Hardwick, in her presence, he admitted taking the spanner. The value of the articles was 5s. A sentence of three weeks' hard labour was passed. He was further charged with stealing from the blacksmith's shop, at Newnham, a hammer and gimlet, the property of Francis George Jones. Jones said he had given the prisoner a penny, and his wife gave him some hot water, tea, and sugar, on Saturday evening. On Sunday morning he missed the hammer out of his shop; he could identify it by a chip, but the handle had been shortened. P.C. Hardwick proved arresting the prisoner, whom he overtook at Lindridge Church. He found a large number of articles, including those now identified, upon the prisoner, who said he had purchased the hammer for 2d. and the gimlet he had when in Walsall. The Bench sentenced him to a further term of three weeks' hard labour, to run consecutively"
"Robbery of Tools"
Worcester Journal : September 8th 1894 Page 3