The Lamb and Flag Inn stood on the south side of Unicorn Hill on the eastern corner of Hill Street. The immediate locality, including the area across Unicorn Hill, hemmed in by Windsor Street and Bates Hill, was densely populated in the late 19th century. 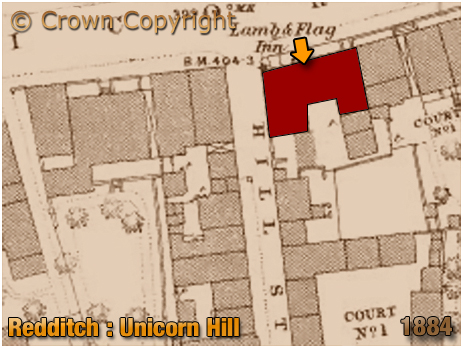 The Lamb and Flag started off as a beer house and was kept by the Tardebigge-born butcher Henry Allen and his wife Lucy who hailed from Leicestershire. By the end of the 1840s the couple seemingly decided to concentrate on the butchery side of their business and relocated to Evesham Street.

Thomas Powell was licensee in the 1850s and, as can be seen from the entry in Billing's Directory and Gazetteer of 1855, he was an agent of the Birmingham Brewery Company, a firm based in Saint Peter's Row just off Broad Street.

Thomas Powell kept the Lamb and Flag with his wife Eliza. Both were from the local area. They later moved to the Fox and Goose at Foxlydiate.

Uriah and Edith Dunn were running the Lamb and Flag in the early 1860s. A decade earlier they were listed at Evesham Street where they operated a butcher's shop. They continued in this trade here at the Lamb and Flag. The premises must have remained suitable for such use from the time the Allen family occupied the building. Uriah Dunn may have been the licensee by the mid-1850s as the Worcester Journal reported that "a pair of barrels belonging to a double barrelled gun, were stolen from the house or Uriah Dunn, licensed victualler." The publican gave information to Police-Constable Selley who "succeeded in discovering where the property had been placed, and afterwards apprehended a needle maker, named William Harris, on a charge of stealing them." On the following day Harris was taken before the magistrates who committed him for trial at the Adjourned Sessions.

The status of the Lamb and Flag was upgraded during the time of Uriah Dunn. Formerly listed as a beer house-keeper and butcher, by 1871 he was recorded as an innkeeper of a public-house. Indeed, he was successful with his application for a full licence at the Sessions of August 1868.

Uriah Dunn died in July 1873 and his wife Edith remained as tenant to Richard Davis, the owner of the building. However, it would seem her affairs were linked to William Oliver Gray who was granted an interim licence of the Lamb and Flag. This was opposed by the police as he already held the licence of another house, the Horse and Jockey, in Stratford-on-Avon. Consequently, at an adjourned meeting, the magistrates granted the licence to Edith Dunn. Her daughter, also named Edith, did much of the work around the house. In November 1871, at Edgbaston Old Church, she had married William Griffiths, eldest son of Edward Griffiths of Bentley. By all accounts he was a poor choice of husband.

Monitoring the house, the police saw William Oliver Gray serving customers on several occasions. He eventually acquired the business and, following a brief management spell by Annie Wright, his son Reuben became licensee in 1877. He had marred the music teacher Catherine Hewius in the previous year. Their stay at the Lamb and Flag Inn was brief as he was recorded as a brewer's traveller four years later whilst living back in Stratford-on-Avon. He continued to work in this role and died just before the Second World War. 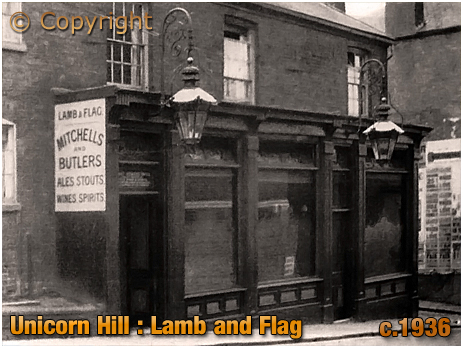 For a brief spell in the early 1890s the Lamb and Flag Inn was kept by the renowned pedestrian George Savage, along with his wife Mary. Born in Alcester in 1858, George Savage was working for the Post Office in Liverpool when he made a name for himself in the athletics world. 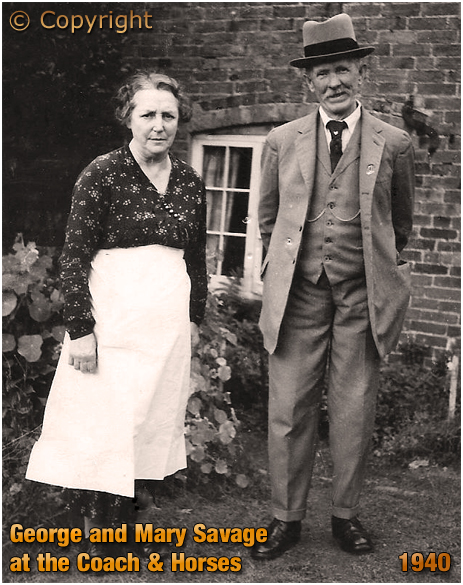 George Savage became a professional pedestrian and won a considerable sum in prize money. After running the Lamb and Flag for a couple of years, George and Mary moved to the Coach and Horses at Weatheroak Hill. Click here to read more about this couple. The licence of the Lamb and Flag Inn was transferred to William Young in July 1893.

Frederick Summers and his wife Catherine moved from the Horse and Jockey at Inkford Brook to run the Lamb and Flag Inn. He was a butcher by trade so it is possible that the outbuildings to the rear of the public-house were continued to be used for meat processing. After a brief spell here at Unicorn Hill, they moved to the Bell Inn at Lapworth. However, his fortunes slumped and his life in the licensed trade came to a messy end.

Beoley-born needle scourer John Jakeman was the licensee throughout much of the Edwardian period. Along with his second wife Mary Ann, he kept the pub until his death in July 1915. He was succeeded by Richard Jones. It was during the time of John and Mary Ann Jakeman that the Lamb and Flag Inn survived a threat to its existence. The pub had been referred to the compensation authority but the licensing committee decided to renew the licence.

Operated by Mitchell's and Butler's, the Lamb and Flag Inn continued to trade until 1937 when, in May of that year, the brewery successfully applied for the transfer of the licence to new premises to be constructed on the site of the Railway Inn, a beer house at Hewell Road. It was their intention to demolish two cottages next to the Railway Inn and erect a larger public-house straddling both plots of land.

Licensees of the Lamb and Flag

"The adjourned licensing meeting was held Wednesday last, when all the licenses the renewal of which had been adjourned, were granted, the police in most of the cases having withdrawn their opposition. In the case of Uriah Dunn, Lamb and Flag Inn, Redditch, a complaint was made that, on a night in June last, there was some drunkenness in the house, but it appeared no proceedings were taken at the time. Mr. Simmons, the solicitor engaged for the defence, commented strongly upon this fact, and upon the applicant having had no notice of the nature of the charge to be preferred against him, which of course he was quite unprepared to meet. The Rev. G. R. Gray, the chairman the Bench, agreed with Mr. Simmons, and hoped that in future all publicans would receive due notice of all complaints to be made against them. Superintendent Bevan pointed out that, under the new Act, it appeared to be the duty of the magistrates themselves to give notice of the nature of the complaints; and, in the course of some remarks, the rev. chairman characterised the Act as one of the most blundering pieces of legislation he had ever known. In this case no notice would be taken of the complaint; and the license was renewed."
"Licensing Meeting"
Worcestershire Chronicle : October 2nd 1872 Page 3

"Walter Roberts, on bail, was charged with stealing a half-pint of whiskey, the property of Edith Dunn, at the Lamb and Flag Inn, Redditch, on the 12th of February inst. Winifred MacManus, a domestic servant, who was, on the day named, in the employ of Mrs. Dunn, stated that at about mid-day she went into the bar and saw Walter Roberts turning the whiskey cask off. He had a bottle in his hand, with a quantity of whiskey in it, and when he saw her he put the bottle between his legs and began messing amongst the jugs. Witness went into the yard and told Mrs. Griffiths, daughter of Mrs. Dunn, and she came and told him about it, and he said he hadn't got it. Prisoner then left the bar and went into the back kitchen. Witness followed him, and saw him just turning away from the oven. She went to the oven, and found the bottle of whiskey in it, and took it up to Mrs. Griffiths. The bottle produced was the same she saw Roberts with at the tap, and the same as she took from the oven. Police-Constable Haynes produced the bottle, and was required to taste the contents, for the purpose of proving whether it was whiskey or not. It was whiskey. William Griffiths, son-in-law of prosecutrix, proved that the bottle produced was the same one that was handed to his wife by the servant girl on the 12th February. Also that the cask contained Irish whiskey, and the bottle contained Irish whiskey. Police-Constable Haynes proved taking prisoner into custody on the day named, and charging him with the offence, to which prisoner replied, "All right; I want to see .... [somebody whose name witness did not catch], he's had many a gallon." Witness asked who he meant, and prisoner replied, "Griffiths." Prisoner was formally charged, and the option being given, he elected to be then tried by the Magistrates, and pleaded not guilty. In defence he made a long statement to the effect that Mrs. Dunn asked him to go and fetch some liquors, having nobody else to see to it, her son-in-law being drunk a-bed; and that being put right, she asked him to go in the cellar and fetch some gin, and then she left him and went into the back yard, and then they raised the tale about the whiskey, and he told them he didn't know anything about it, and then the son-in-law came downstairs and gave him in charge. Prisoner called Joseph Milward as a witness on his behalf, but the evidence he gave was of no importance, either pro or con. The Magistrates decided that the prisoner was guilty of the charge, and sentenced him to fourteen days' hard labour."
"Stealing Whiskey"
Bromsgrove & Droitwich Messenger : February 28th 1872 P.2