Some history of the Fox Inn at Romsley in the county of Worcestershire. 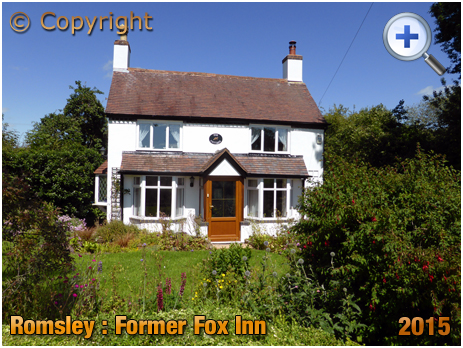 Licensees of the Fox Inn

1887 - John Homer
Note : this is not a complete list of licensees for this pub.

"On Thursday, before Mr. A. H. Hebbert [Deputy Coroner], an inquest was held at the Fox Inn, Romsley, upon the body of Edward Stevens, aged 58 years, who committed suicide by hanging on the 15th instant. Ann Stevens, the wife of the deceased, gave evidence to the effect that her husband had been strange in his manner of late through having to leave his farm, which he appeared to take much to heart. He did not seem to get any sleep at night, and often got up and walked down stairs. On the morning of the 15th instant deceased began to unlace his boots, and sent her on an errand to a neighbouring farmer. On her return she missed him from the house, and went in search of him in the orchard, but eventually found him hanging by the neck in the barn. She at once proceeded to a neighbour named Smith, who went to the barn. Joseph William Smith deposed to finding the deceased hanging by the neck in the barn. He did not cut him down, as he was dead. Police-Constable Clarke deposed that at 12 o'clock he went and saw the deceased hanging by the neck. He at once cut him down. He searched the deceased, and found a knife and handkerchief only upon him. Inspector Raybould put in a letter and an agreement from Mr. Benjamin Bolt, Aston, stating that the deceased had received notice on that day to quit his farm. The main feature of the document was that the deceased was requested to pay his rent quarterly, but refused, and consequently received notice to quit. Dr. Young gave evidence to the effect that deceased died from strangulation caused by hanging by the neck, and a verdict of suicide whilst temporalily insane was returned."
"Strange Death of a Farmer"
Bromsgrove & Droitwich Messenger : June 20th 1891 Page 8