History and Information on Stourbridge in the County of Worcestershire.

Some history of Stourbridge

At the time of Domesday, Stourbridge was in the parish of 'Suineforde' [Oldswinford] and was owned by William Fitz Ansculf. Ansculf, who lived in Dudley Castle, was rewarded for his services by William the Conqueror with the gift of twenty-five manors in Staffordshire, fourteen in Worcestershire and five in Warwickshire. Named after a crossing over the River Stour, the market town of Stourbridge has, over the centuries, been an important trading centre of the region. From early Norman times up until the industrial revolution Stourbridge was primarily a market town for the agricultural and woollen trades of the surrounding countryside - the town was granted a market in 1482. However, the town subsequently played an important part in the growth of the Black Country during the early industrial age.

A bridge at the lower end of the High Street [the river has moved over the centuries] was certainly in existence during the 13th century because the name of Stourbridge occurred as Sturbrug and Sturebrige in a Worcestershire assize roll of 1255. The bridge almost certainly caused the majority of interactions [and subsequently population] to shift from the parish of Oldswinford [once much larger than Stourbridge] down towards the river. A large road was constructed to move traffic over the bridge and was called Digbeth [now called Lower High Street]. 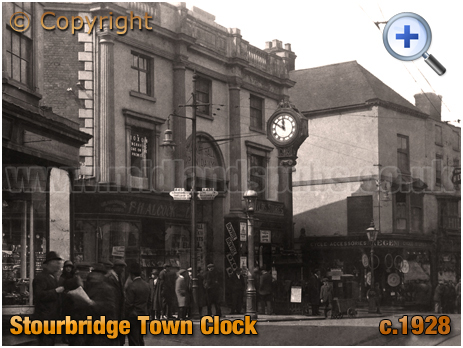 A photograph of Stourbridge Town Clock that stands in the centre of the road junction of High Street, Coventry Street and Market Street. This decorative time-piece was made of cast-iron in 1857 at John Bradley's Ironworks. Up until 1972 the clock had to be wound manually twice a week from a loft in Stourbridge Market Hall but nowadays it has an electric mechanism. The adjacent Market Hall has since gone but Nos. 4-6 Market Street formed part of the building which was erected in 1827. It is typical of the period when Greek and Roman architectural styles were prevalent in British town planning. This building includes Doric-type columns and stucco has been used to replicate Mediterranean stone and marble. The shop on the corner was occupied by F. Alcock who sold gramophone records. The Regent Cycle Shop can be seen next to Hilton's.

If you have a genealogy story or query regarding Stourbridge you can contact me and I will post it here in addition to including your message within the website pages for Worcestershire Genealogy.

If you would like to share any further information on Stourbridge - perhaps you drank in one of the pubs in the past? Or maybe knew a previous publican running one of the boozers? Whatever the reason it would be great to hear of your stories or gossip. Simply send a message and I will post it here.

"A shocking accident occurred last Monday to James Careless, steam-roller driver for the Stourbridge Commissioners. He had been at work some Stourbridge with the roller, and after he started homewards he stumbled and fell from the fireplat into the road. He tried to get clear of the roller, but it crushed against his side, inflicting a terrible injury. The poor fellow did not long survive."
"Fatal Steamroller Accident"
Worcestershire Chronicle : April 14th 1888 Page 2