Some history of the Live and Let Live at Wolverley in the county of Worcestershire.

The Live and Let Live traded on The Holloway, on the right-hand side of the road heading up the hill towards Blakeshall. Though radically altered, the building has survived into the 21st century. 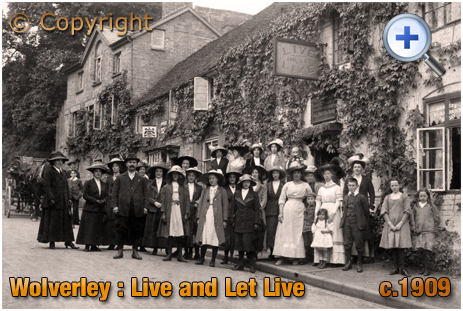 This late Edwardian photograph shows a group of day-trippers outside the Live and Let Live. It is mostly women standing in front of the pub, along with a few children, so it was not a boozy blokes trip from the Black Country. It looks like fine weather but everybody is wrapped up, many are wearing gloves and there are plenty of umbrellas to be seen. Perhaps it was a springtime trip with inclement weather conditions. Having said that, many windows are open. There is one man stood at the front who may have been the driver of the brake parked a little further up the hill. There are a lot of people for the size of the vehicle and only one horse to pull it along! 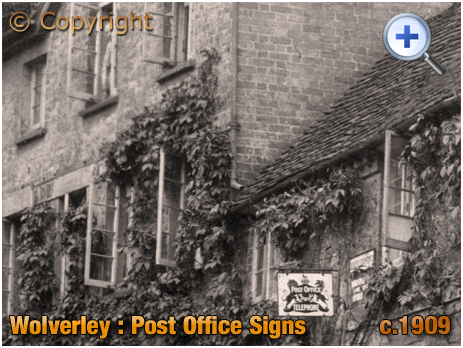 Looking at the adjoining building there are signs for the post-office, including one advising of the public telephone available inside the shop. Note the man in the upper floor window of the taller house next door. He may be George Robinson who lived next to the post-office during the Edwardian period. The former metalworker had turned to gardening for his income during the latter part of his working life. A local man, he lived here with his wife Rachel who hailed from the village of Neen Sollars in Shropshire. At the time of this photograph the post-office was run by the Carter family. Trimpley-born Thomas Carter was both tailor and postmaster. He was helped by his daughter Mary who became the sub-postmistress following his death in July 1910. 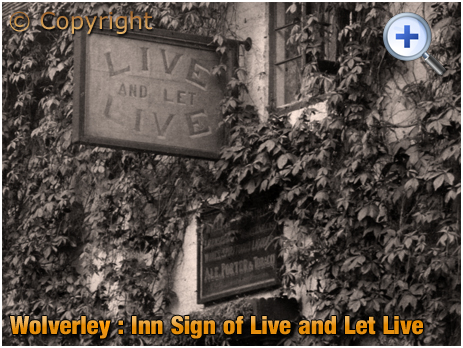 There was no pictorial signboard outside the Live and Let Live at this time. Sign artists would often feature a cat and mouse getting on like a house on fire, or at least with the cat tolerating the mouse rather than clawing at it. Sometimes freshly-born chicks would be painted next to a cat with motherly tendencies. Despite the growth of wall plants on the building, the name of the licensee can just about be made out above the entrance to the Let and Let Live. In the Edwardian period the house was run by William Purdy. He was born in the Lancashire town of Rochdale where his father worked in the wool trade. William Purdy tried his hand with a number of jobs and his involvement in the licensed trade began when his father became licensee of the Britannia Inn on Lomax Street in the Wardleworth area of Rochdale. In October 1896 he married Rosanna Wall, daughter of a local police officer. However, she was originally from Claines and this may have been a factor in the couple moving south to Worcestershire. In the photograph above there is a man stood by the entrance to the Live and Let Live. Wwearing just a waistcoat, this may be William Purdy the licensee. He and Rosanna kept the pub for many years. They are listed at the house in an electoral roll for 1930. They later moved to a house on Franche Road. 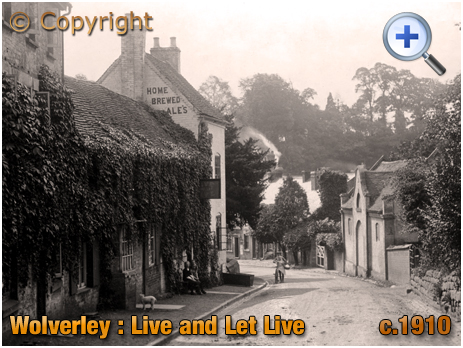 This photograph of the post-office and Live and Let Live was taken a little further up The Holloway with the camera lens looking back towards the village. I am guessing at 1910 but I know for certain that it is no later than 1911. The key element of the photograph is the lettering painted on the wall of the neighbouring property advertising homebrewed ales. Licensee William Purdy brought in some expertise for this part of the business. In the 1911 census Alfred Norman was living on the premises and documented as a brewer. 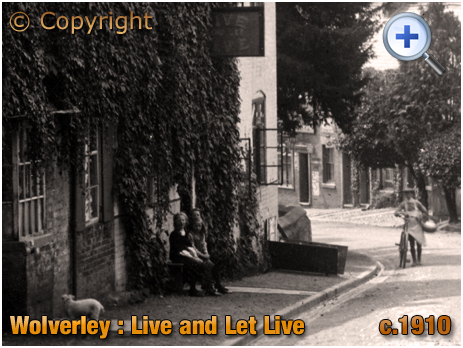 In this closer view three young girls can be seen sat outside the Live and Let Live. A young delivery lad is walking his bicycle up the slope from the village. Having pedalled up that hill zillions of times I have to wonder why he is not cycling himself as it is only a slope. Note that the doors of the cellar trap are open. In the distance the shop operated by the grocery and provisions dealer Charles Howell who was also a baker. William and Rosanna Purdy had two young daughters living at the Live and Let Live during the Edwardian period so the children featured in this image may include Alice and Evelyn Purdy.

Licensees of the Live and Let Live 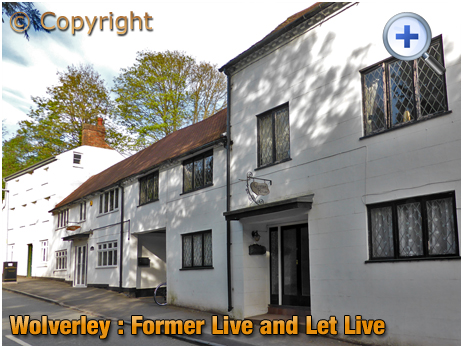 "Jubilee Barth, weaver, and his wife Elizabeth Barth, appeared on remand, on a charge of stealing yarn and other articles belonging to Mr. Edward Hughes, carpet manufacturer. Mr. Corbet appeared to prosecute, and Mr. Crowther for the defence. The following additional evidence was given : Sarah Lench, servant at the Live and Let Live Inn, Wolverley, deposed that the female prisoner, having called at that house on the 30th January, with mops for sale, her mistress purchased one for 1s. 4d. The mop was made of worsted yarn. John Walton, boatman, Wolverley, deposed to having bought mops from Mrs. Barth. Mr. Hughes gave evidence as to the identity of the property found at the prisoner's house. Barth had been engaged at his factory in working up the description of yarn which had been stolen. The prisoners were committed for trial at the Sessions."
"The Robbery at a Carpet Factory"
Worcester Journal : October 23rd 1869 Page 3