Some history of the Albion Inn near Diglis at Worcester in the county of Worcestershire.

The Albion Inn was located at Greenhill on the junction of Bath Road and Diglis Road, a prominent position enjoyed by the curved building for many generations. References to the hostelry date back to the 1820s and a building is marked at the road junction on a map dated 1822. Tolls for the turnpike road to Tewkesbury, Gloucester and Bristol were originally collected at the junction of Sidbury but were later moved to this location following the development of Bath Row at the northern end of Bath Road.

Although away from the centre of the city and enjoying a semi-rural position for much of its early trading years, the Albion would later benefit from the trade centred on Diglis Basin, along with the timber yards, flour mills and other industries that were clustered around the waterway. With the Royal Porcelain Works being just across the canal, connected with a bridge on Mill Street, the Albion was patronised by those engaged in the china trade. 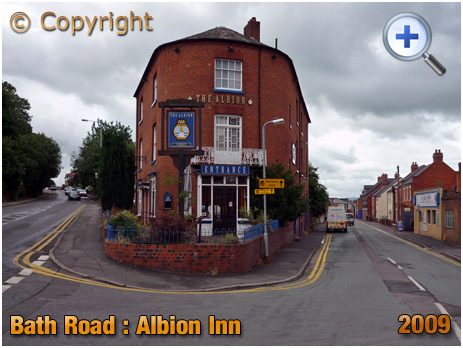 When the building was erected the only other landmark residence nearby was a mansion named The Hill, home of the Feild family. This was a short distance to the south on the opposite side of the turnpike road. The son of a Worcester surgeon and apothecary, Edward Feild was born in 1801 and spent his formative years at The Hill. Educated at Rugby School and Queen's College, Oxford, he later studied divinity and was ordained a deacon in 1826. He became the vicar of English Bicknor in the Forest of Dean from where he was noted for his educational reform work. In 1844 he was appointed Bishop of Newfoundland by Lord Derby, who held the office of Colonial Secretary under Sir Robert Peel. With guidance from Sir George Gilbert Scott, Edward Feild built a cathedral and by 1855 he supervised the construction of 27 new churches on the Gothic pattern. His diocese also included the Bermudas and it was there that he died in 1876.

In Pigot's trade directory of 1828-9 the Albion Inn was recorded as an inn rather than bundled in with the listing for taverns and public-houses, suggesting that the building was designed to offer accommodation to visitors and travellers from its inception. William Smith had been the licensee for some months before he held a house-warming dinner at the hostelry on March 26th 1828. 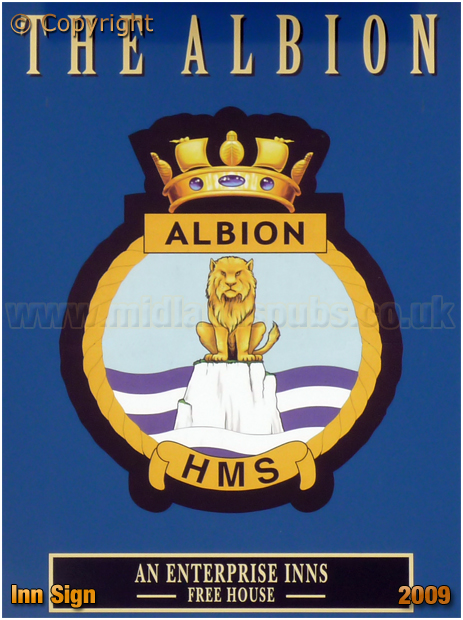 It is possible that the inn sign of The Albion was chosen as the old turnpike road had once formed part of an ancient route used by the Romans. Vessels from their occupation were found nearby at Diglis in 1860 when labourers were digging for sand. The word Albion is a poetic name for Great Britain and is thought to derive from the Latin 'Albus' or 'White.' This Roman term arose from the whiteness of the cliffs on Britain's southern coast and was almost certainly applied during the invasion and conquest of AD43. This signboard was photographed in 2009 and features H.M.S. Albion. At this time there had been nine ships of the Royal Navy that have sailed under the name of Albion. The earliest was a 74-gun third-rate ship launched in 1763. In 1947 the name was given to a Centaur-class aircraft carrier that was later converted into a commando carrier. Why Enterprise Inns opted for such a signboard is rather odd.

The Albion Inn was the venue for many auctions in the late 1820s and early 1830s. Warehouses at Diglis Basin, along with plenty of canal barges were offered at auctions held on the premises. Timber was also sold at the Albion Inn, much of which was brought from other areas along the canal network. The canal was completed towards the end of 1815, the culmination of 23 years excavation work.

Licensees of the Albion Inn

"My Grandparents Lily and Victor Norcott were the publicans at the Albion Inn from 1954 to the late 1960s. Many years before, and I think that this was during the First World War, the pub housed soldiers. It had also been a hotel in the past. There were certainly a number of floors where bedrooms were set out like a hotel. Many of the locals who drank in the pub during the 60s were workers from the nearby Royal Worcester works. I remember a lady called Mrs. Gaskin who I believe hand-painted some of the Royal Worcester china. I have lots of photographs of the pub, mainly inside but a few of the front with me sitting on my Grandad's knee! I also have some old M'B stuff that was in my Grandad's things and then my Dad's. It was a real old-fashioned pub, I remember that they played dominoes, cards and had a piano in the small bar which some of the locals played and I believe my grandmother used to sing occasionally. This was before large screen televisions."
Sue Norcott, Worcester

"At the Worcester County Magistrates' Office, on Monday, before Mr. P. S. Williams, Edward Arthur Smith, a private in the Worcestershire Militia, was charged with indecently assaulting Kate O'Callaghan. The complainant, who is 15 years of age, stated that she was a domestic servant at Norton Barracks. On Tuesday, the 10th inst., she was returning home from Worcester to Norton, about nine o'clock at night, and was going by the Albion Inn, Bath Road, when defendant came out of that house. She was on the opposite side of the road, and defendant walked by her. When they had gone about a quarter of a mile he said: "Can you tell me the way to the Barracks?" Witness told him. He then asked her where she was going, and she told him. He said "We shall be nice company." She told him she would rather go herself, but he said "Indeed, you won't," and walked with her to Barn's Hall. Twice he put his hand in her pocket and she pushed it away. He then pushed her into the hedge, and she fell down. She got up and ran on the other side of the road; but prisoner continued to follow her. When she got to a cottage she stopped for the purpose of getting rid of him, telling him she lived there. He said "No, you don't, you live at the Barracks." He pushed her against the gate and assaulted her. She screamed and got away from him. He wished her goodnight, and went towards the Barracks, but she stopped by the gate. Then, seeing him coming towards her again, she ran towards Worcester, and met three soldiers, and asked them to let her accompany them. They consented, and she walked to the Barracks with them saying that prisoner had been trying to assault her. When she got to the Barracks she met Mr. Bridges, the schoolmaster, and told him what had happened. Prisoner told her his name was Smith. She did not know him before that night. He was in uniform. Cross-examined by Mr. Tree, who appeared for prisoner, prosecutrix said: "I did not speak to prisoner first, nor did I ask him if I could walk to the Barracks with him." One of the three soldiers said that complainant started crying and seemed "put about," and walked with them to the Barracks. When witness got there he went to prisoner's room and said to him "You look like getting six months for trying to assault a girl down the road." He said, "I never touched the girl." Cross-examined by Mr. Tree, witness said: "When I made that statement to the prisoner I only knew what the girl had told me about the case." Charles Ranford, another soldier, said that when complainant told them about prisoner trying to assault her, witness could hear someone running in the distance towards Norton. Lance Corporal Augustine said that he heard prisoner at the Barracks about 9.30 at night saying that he met a girl [using another term] on the road. He seemed very excited, but witness did not know whether he was drunk or sober. Alfred Joseph Bridges, warrant officer and Army schoolmaster at the Barracks, said he gave the girl permission to go to Worcester, on her own account. She was to return at nine o'clock but did not get to the Barracks till just before 10. Witness met her just inside the Barracks gate. Prosecutrix ran up to witness in an agitated state; she was crying and said she had been molested on the road to the Barracks. Witness asked her if she was hurt, and she said "No." He reported the matter to the Sergeant-Major, and next morning prisoner was placed under arrest. When the Sergeant-Major charged him with assaulting the girl, he replied, "I know nothing about it, as I had a fainting fit last night; but I hope you will look over it this time and give me a chance." P.C. Cooper stationed at Whittington, said that when he read the warrant over to prisoner, he replied, "That's wrong; I never touched her." On the way to Worcester he pointed to a cottage within a quarter of a mile of the barracks and said, "That's where I left her." The prisoner was committed to the Assizes, bail being allowed, himself in £10. and one surety in a similar sum."
"Serious Charge Against a Worcester Militiaman"
Worcester Chronicle : January 21st 1899 Page 7