Some history of the Bush Inn in the Bull Ring at Worcester St. John's in the county of Worcestershire. 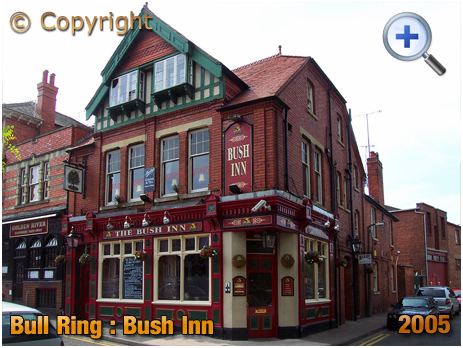 Licensees of the Bush Inn

1871 - Thomas Epps
Note : this is not a complete list of licensees for this pub.

"John Chivers [31], sweep, no fixed address, was charged with being drunk and refusing to quit the Bush Inn, St. John's, last night, and with being riotous in the Bull Ring. A police officer said the landlord of the inn called him into his house to put defendant out. Defendant refused to go, and witness was obliged to put him out. He then became very riotous, and on being taken into custody, resisted all the way to the police station. He had been before the Court six times before, and was fined 10s. 6d. or fourteen days' imprisonment with hard labour."
"Resisting The Police"
Worcester Chronicle : February 26th 1887 Page 8