History of the Pack Horse Inn at Hollywood, Wythall in the county of Worcestershire.

Some history of the Pack Horse Inn

The Pack Horse at Hollywood was formerly known as the Pack Horse Inn but later gained hotel status - as can be seen in livery within the early 20th century photographs below. In more recent times, the building was converted into a branch of Sizzling Pubs, a network of budget licensed restaurants under the Mitchell's and Butler's retail arm. I think it is fair to say, therefore, that the old pub has lost its identity. 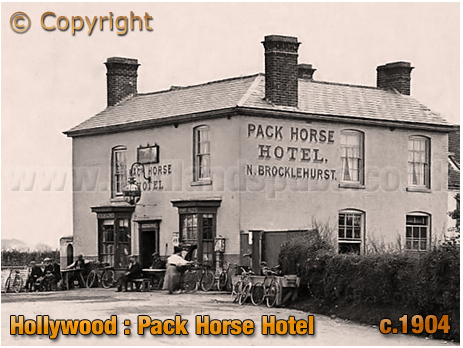 Located in a relatively isolated position, the pub prospered as a destination hostelry with Brummies enjoying a trip out to Worcestershire on bicycles, charabancs or, in later times, when the old Austin got wheeled out for a Sunday spin.

Like the nearby White Swan Inn at Drake's Cross, early publicans of the Pack Horse Inn were also engaged in agricultural work. Both houses were a locus for farm labourers in the evenings. Other Victorian patrons also found work as labourers in nearby clay pits, a local brickyard and a timber yard. In its early days the Pack Horse Inn prospered from a fair deal of passing trade as the hostelry was one of many taverns fronting the old turnpike road connecting Birmingham with Alcester. 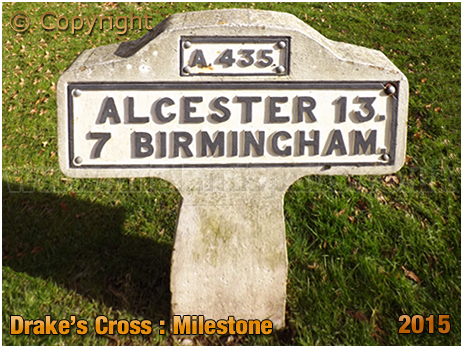 To the south of the Pack Horse Inn there is a milestone on the Alcester Road. The original milestone may have gone but a replacement still stands opposite the old fish pond from which the signboard of the White Swan may have taken its name. Hidden from the former turnpike by trees, the pond is fed by the Iss Brook which flows into the Peterbrook Mill Pool and the River Cole near Major's Green.

The old road to Alcester was improved in sections through a number of Turnpike Trusts established in the 17th and 18th centuries. Prior to these bodies, maintenance of the highway was the responsibility of parishioners who would have to undertake up to six days unpaid labour on road works. This system was poorly managed and the roads were generally in a dreadful state. As early as 1637 the inhabitants of Alcester were "presented at Quarter Sessions for not repairing a footway to Birmingham." The Turnpike Trusts brought about great improvements to the highways by taking tolls at strategically-positioned toll-gates and side-bars.

The turnpike was an important trade route between the industrial town of Birmingham and the bountiful Vale of Evesham. It has been recorded that every day 80 pack-horses passed along this road during the 18th century in order to carry garden produce to feed the growing industrial heartland. Little wonder therefore that a signboard of the Pack Horse Inn was to be found along the route. 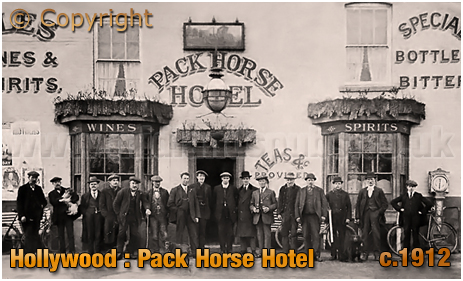 A key difference between the this photograph and the earlier image featuring the cyclists is the additional painted signage, suggesting that the Pack Horse Inn had been taken over by a large brewery. These companies tended to emblazon their public-houses with advertisements for their own products. In the first photograph the building simply has Pack Horse Hotel and the name of N. Brocklehust painted on the wall. The publican at the turn of the 20th century was Noah Brocklehurst - more on him in a bit. As a keen cyclist, I love the fact that there are loads of bicycles parked up outside the Pack Horse Hotel with riders enjoying refreshments before continuing on their journey. 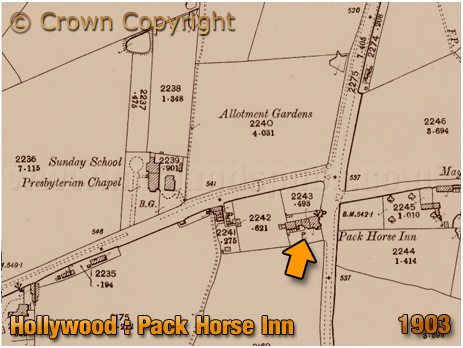 This map extract shows the Pack Horse Inn on the skew-whiff crossroads at Hollywood in 1903. The Presbyterian Chapel still stands to the west of the pub along Pack Horse Lane. In more recent times this has evolved into the Kingswood Meeting House, a vibrant Unitarian Church.

The Pack Horse Inn was originally part of a farm with the publican undertaking agricultural duties in the day before serving ale in the evenings. Local farm labourers would head for the pub after a day grafting in the fields, perhaps at May Farm, Shawhurst Farm, Makielhall Farm or Woodleaf Farm to name a few of the nearby businesses. 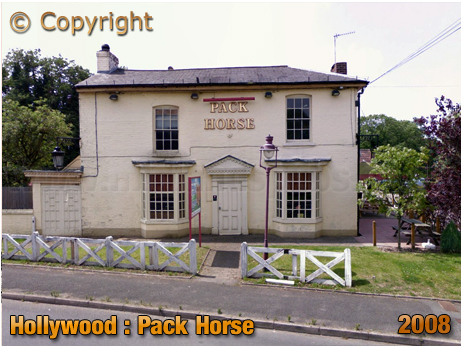 Thomas Preston was the farmer and victualler of the Pack Horse Inn during the early 1840s. He kept the hostelry with his wife Mary; the couple were married in 1821. As a widower, Thomas Preston continued working in agriculture in the locality but had given up the Pack Horse. The Moore family were in charge of the tavern during the mid-19th century. Indeed, at one time Joseph Moore was running the Pack Horse whilst John Moore was in charge of the Swan Inn at Drake's Cross. 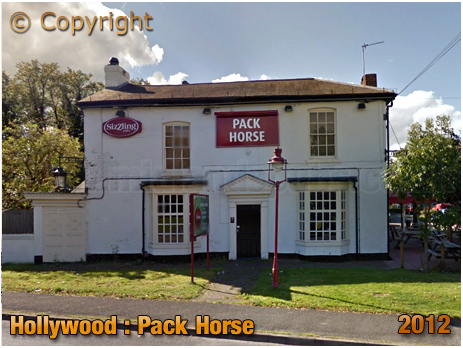 Enoch Edwards held the licence of the Pack Horse Inn before moving to the Rifleman's Arms at Redditch, a pub operated by Messrs. Brown and Co. In the first photograph [above], however, Noah Brocklehurst was mine host. He kept the hotel with his wife Sarah. The couple had married in 1866 at Chesterfield. The Brocklehurst's had moved south from Eckington in Derbyshire. Born in Hollinsend at Sheffield in 1845, Noah Brocklehurst had previously worked as a miner for many years whilst he and his wife ran the Sydney Arms in Queen Street, Eckington. I have a record of a Noah Brocklehurst running the Old Swan at Lye in 1900. It is quite an unusual name so this could have been the same person. Perhaps this was the couple's move south before a change of Worcestershire locations? Noah Brocklehurst died in 1909 and his wife moved a short distance away at Birch Acre in Watery Lane. 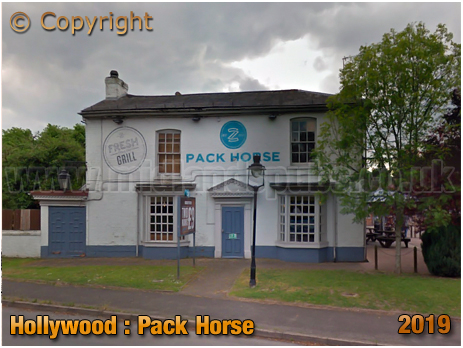 The photograph [above] of the Pack Horse Hotel showing a gathering of men outside the front door was possibly a day trip from another public-house in Birmingham. Note how the building is covered in advertising. I suspect that this followed the sale of the pub in 1914. An advertisement in the local press showed that there was to be a sale of the stock and contents in October due to the owner leaving. The stock included heifers, bullocks, horses plus outdoor effects including a float, garden seats, lawn mower, farm tools and a Triumph motor cycle.

If you have a genealogy story or query regarding the Pack Horse Inn at Hollywood, Wythall you can contact me and I will post it here in addition to including your message within the website pages for Worcestershire Genealogy.

"At a successful vegetable show, held at the Pack Horse Hotel, Hollywood, Birmingham, a collection was made for the Blind Institution, while the vegetables were afterwards given to the local hospital."
"War Office and Red Cross"
Birmingham Gazette : October 15th 1918 Page 4